Microsoft's Azure chief: What's good for cloud is good for on-premises too

I first met Scott Guthrie in Las Vegas in September, 2000, where he was talking up a web development framework then called ASP+, which he had developed alongside Mark Anders. The framework was ASP.NET and became a key part of the Microsoft platform.

Guthrie also impressed me a few years later, when he was responsible for Silverlight, Microsoft’s browser plugin which for a brief time seemed critical to the company’s platform. I remember a 2009 telephone conversation just ahead of Microsoft’s Mix event in Las Vegas, when Guthrie reeled off a list of new features in Silverlight 3.0, addressing most of the issues developers had asked for, including the ability to run out of browser as a desktop application on Windows or Mac.

Silverlight died, but in early 2011 Guthrie was part of an executive reshuffle that gave him a role running the Azure cloud platform, which at the time was struggling to make an impact. Even his own team had difficulty signing up for accounts during an exercise, as Guthrie confessed to The Reg the following year.

Soon there was a new admin portal, the ability to use proper durable virtual machines (VMs) on Azure, and the launch of easily scalable Azure websites – three things which kick-started the evolution of Azure into a credible competitor to Amazon Web Services (AWS).

Guthrie is now Executive VP of Microsoft’s Cloud and Enterprise Group and responsible for Azure, SQL Server, Dynamics 365, System Center, Visual Studio and .NET. He seems determined, though, to stay in touch with developers, and recently toured Europe with Red Shirt Day events (he normally wears a distinctive red shirt) where he described new features in Azure and took questions. 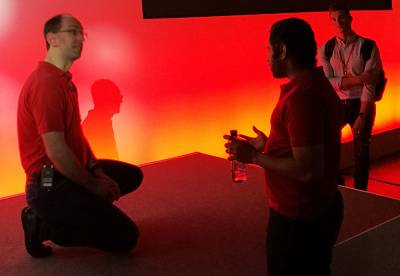 Late last month he was in London again for a “Business Forward” event focused on Dynamics 365, Microsoft’s CRM (customer relationship management) and business operations tool, and gave The Reg an exclusive interview...

Creating ASP.NET was an attempt to simplify web programming way back when. What is Microsoft’s developer strategy today all about?

Guthrie says cross-platform is at the heart of it. At the Build developer conference, he says, “We showed Python apps, Node apps and .NET apps, we showed Windows, we showed Mac, we showed Linux, but the uber theme was you can be successful across every tech stack, across every operating system. That is a big change, which is helping to lead to engagement with Microsoft across a much broader developer community.”

A distinctive feature of Microsoft’s cloud platform is that it has Office 365 alongside it. What are the synergies between Office 365 and Azure?

“We’re increasingly exposing our Office services as APIs or as building blocks that developers can integrate with,” says Guthrie. “For example, things like Microsoft Teams and our Bot Framework. Internally we’re increasingly exposing bots through Microsoft Teams, so if we have a technical support question, you just ask a bot, and it pulls from the CRM system, it pulls from our internal systems.

“Office 365 uses Azure Active Directory, so the ability to use the same authentication and authorization mechanism across all your apps, all your VMs, all your containers and resources, is another example. Beyond the capability, it’s the 100 million monthly active Enterprise users that are logging in every day to Office 365. You can make your applications much more valuable, and much more easily consumable.”

The UK now has its own Azure Region, opened around a year ago. We’ve heard, though, of capacity issues and customers being asked to host elsewhere. Why the issues with a brand new region?

“Generally we don’t have data center capacity issues,” says Guthrie. “We keep building data centers. We do sometimes have – and all the cloud vendors have this – particular VM types or particular server types which might get tight on capacity.

“In Azure customers can reserve quota. There was a point in April or May, where for about a week we put some quota restraints on new customers. The growth of our UK region is about four times the business plan that we originally had. We had to activate more servers and we don’t have any quota constraints right now.”