Four times as massive as a proton, a way to check out the strong nuclear force 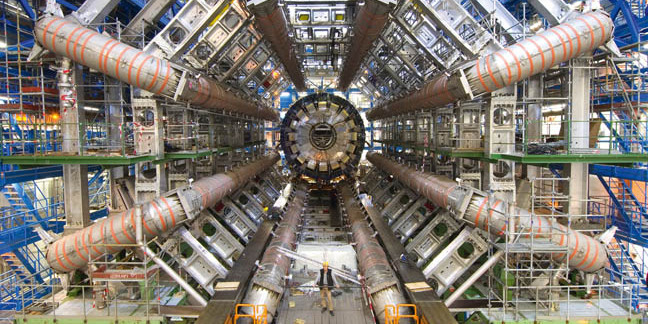 What happens if you get two charm quarks together in one baryon? Something four times as heavy as a proton that can help the world understand the strong nuclear force, according to boffins at the Large Hadron Collider.

Last week, CERN announced the first “unambiguous” observation of a particle comprising the two charm quarks and one up quark – something the researchers say is predicted by the standard model and has been sought for many years.

As with most exotic particles, the Xicc++ baryon doesn't last long, and observation comes from watching what it decays into. In this case, enough collisions in the LHC deliver up something that decays into “a Λc+ baryon and three lighter mesons, a K- kaon and two π+ pions.

So why does this matter? Because, the boffins reckon, the two-heavy-one-light combo in the Xicc++ should behave differently to more mundane baryons.

CERN quotes former LHC collaboration spokesperson Guy Wilkinson, a professor at Oxford University: “In contrast to other baryons, in which the three quarks perform an elaborate dance around each other, a doubly heavy baryon is expected to act like a planetary system, where the two heavy quarks play the role of heavy stars orbiting one around the other, with the lighter quark orbiting around this binary system”.

The collisions creating the Xicc++ baryon were observed at 13 TeV operations, corresponding to an integrated luminosity of 1.7 inverse femtobarns. The paper describing the discovery is here. ®

CERN ready to test an even bigger gun