Blasts out 7 new PowerEdge products with better stuff inside

Customers will get better automated server setup and security plus more performance, and more and faster-access storage capacity – Dell being convinced that software-defined and virtual SAN storage using commodity servers and drives instead of proprietary arrays is going to become a major part of enterprise data centres.

There is a good SAP HANA benchmark due to using the new R940 server as well – also not public yet.

There are seven 14G servers being announced: 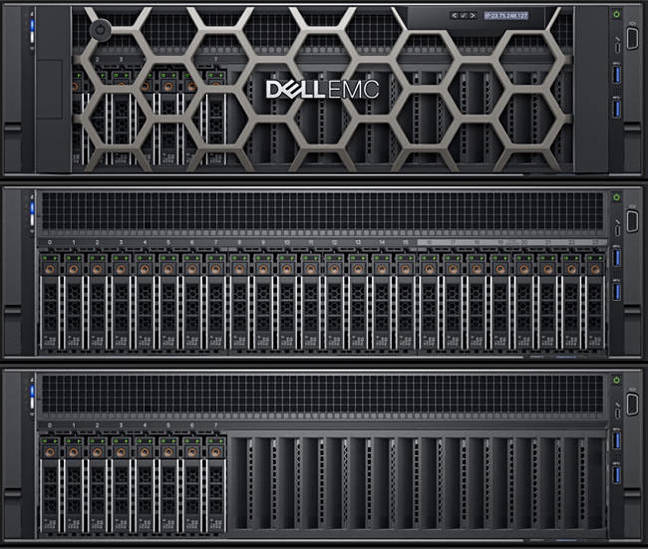 The R740xd provides the server base for ScaleIO, VMWare VSAN and Storage Spaces Direct Ready Nodes, as well as VxRack and Rail, and Nutanix XC hyperconverged appliances. It also features in so-called Ready Solutions for Azure Stack and Hadoop.

We're told that 14G servers will be ready for the M1000e, FX2 and Vertex (shared infrastructure server system for remote/branch offices) chassis later this quarter.

Where the 13G server generation used v8 of the iDRAC subsystem, the 14G ones use v9. It has a RESTFul API with Redfish support. This system can look at a server's ports and recognise what's plugged into them.

Joe Wiese, systems design engineer at Rackspace Hosting, was enthusiastic. "The web front-end can view and edit the iDRAC, the PERC, the NICs, and the BIOS all through a single web interface that is also Redfish compliant for scripting via API calls. It is hands-down the single greatest addition to PowerEdge that I have encountered."

With data centres expected to deploy more and more servers automating the processes, this is more important. The 14G servers come with OpenManage Enterprise, an automation management facility building on the prior OpenManage product. This adds auto-discovery of Nutanix XC, VxRack and VxRail nodes, characterising servers in these roles and managing appropriately.

You can push out profiles pertinent to these roles and build hundreds or thousands of servers at a time using this console.

It has tablet and smartphone integration via OpenManage Mobile. Previously 13G's QuickSync was limited to Android. QuickSync 2 has multiple connections to the system.

There is also scripting support via the API.

On the security side iDRAC 9 has a hardware root of trust feature. Firmware updates are authenticated, there is PowerEdge Secure Boot and the system configuration can be locked down, preventing BIOS and firmware updates. An iDRAC 9 login is needed to reverse the lockdown. Servers can also be repurposed or retired safely with Instant Secure Erase. 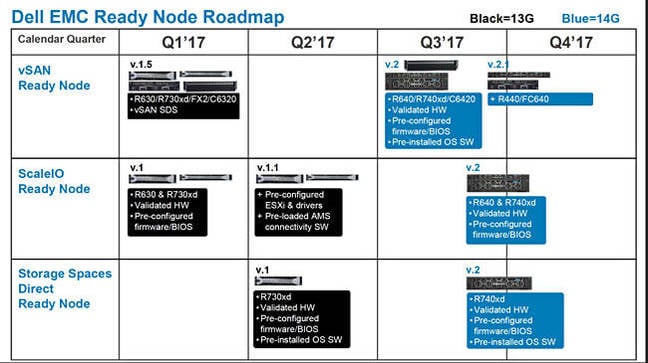 The R640 and R740xd ScaleIO Ready Nodes have, we understand, NVDIMM-Ns to enable compression and metadata acceleration, plus GPU support for VDI workloads and 25GbitE networking options. Storage has been enhanced with new NVMe options and higher capacities in hybrid and all-flash configs.

The R740xd is used for a Storage Spaces Ready Node, and features GPU support for VDI Workloads, 25GbitE networking options, and support for both RoCE and iWARP. It also has more NVMe options and the higher capacities in hybrid and all flash, plus more storage flexibility.