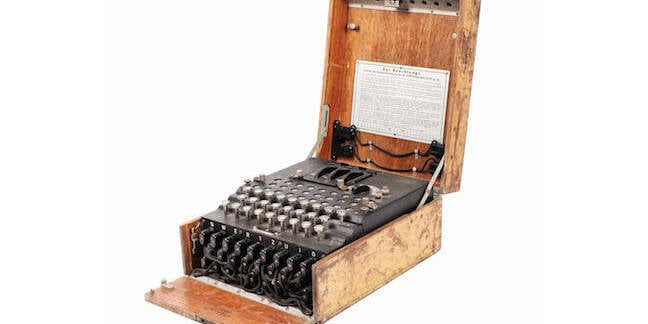 A cryptography professor wandering through a Romanian flea market has turned a nice ROI on his €100 investment: €45,000.

That's because what was on offer was a 1941-manufacture German Army three-rotor Enigma I. The unnamed collector who picked it up sold it through Bucharest auction house Artmark, and the unit beat its €9,000 reserve price five times over.

Artmark's collectible consignment manager Christian Gavrilla told Reuters the collector is “a cryptography professor and ... he knew very well what he was buying”.

Enigma machines were sent to Romania as a German ally, until it switched sides to the Allies in 1944, so Reuters speculates that there may be still others undiscovered in the country.

In Blighty, Enigma is forever bound with the names of Alan Turing and Bletchley Park, Turing as the best-known boffin of the crypto-cracking farm to help win World War 2 (and incidentally helping to kick-start the computing age).

While Artmark described its offering as “extremely rare” (and in remarkably good condition), it came nowhere near the US$395,000 fetched by a U-boat Enigma in 2015.

London Zoo offers a night tour with Ronnie and Reggie

Not the murdery gangsters, a pair of together-forever gay penguins