What can you do with adult VR, some bronze gears and a robotic thumb? On a Friday?

Well, it gets a prosthetic thumbs-up from me

Something for the Weekend, Sir? A VR headset is pressing down on the bridge of my nose. The strap is pulling out strands of hair from the back of my head. I have bruised shins after walking into a coffee table.

This, apparently, is "the closest thing to real sex".

I must be doing it wrong. VR, that is. Or sex. Or both. Perhaps not expecting to get bruised or have my hair pulled out, not to mention the general absence of elasticated strapping, marks me out as some kind of freak.

Such issues... er, I mean problems derive from the limitations of the hard stuff... er, hardware. As lighter, smaller devices come... enter... arrive on the market, clumsy users such as me should face fewer handling difficulties.

VR is the future, etc, etc, and I wish Android erotica app developer Lazeeva the best of prosperity for its partnership with adult webcam portal CAM4. With their promised support for interactive sex toys that you can just plug in, not to mention dramatically improved "retention rates" (always a good thing), I feel confident they will soon achieve satisfaction from full market penetration.

Indeed, as technology advances and such gadgets improve, I fully expect to hold my own. Once manufacturers deal with the comfort factor, only then will I truly be able to hold my head up. In public.

It's good to know technology is so effectively being used to push the boundaries of intellectual advancement.

I mean, just 2,000 years ago, we were practically savages. No smartphones, no internet, not a single knuckle shuffle app in sight.

Unless, of course, we have radically misunderstood the function of the Antikythera mechanism. 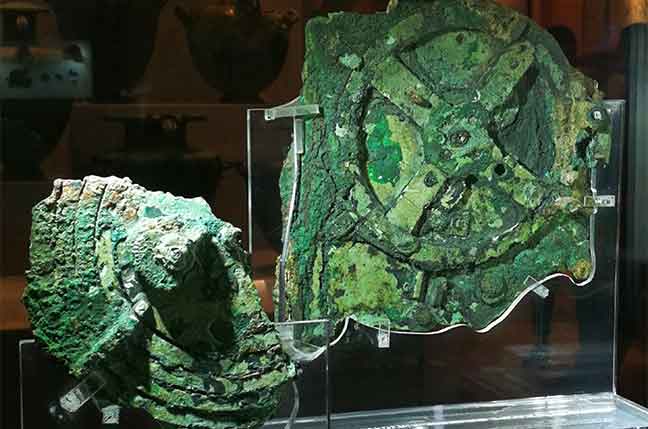 Apologies to those who are unaware of this gadget. It is, after all, rather hidden away in the Athens Archaeological Museum across three vast rooms near the entrance and the subject of 100 years of startling investigation.

If the Wikipedia entry is a bit TL;DR, here's a summary: the Antikythera mechanism is the world's oldest computer for which physical remains exist. Discovered among statues, pots and other relics in an ancient shipwreck, this thing dates back to roughly 150-100BC.

It's not some trumped-up abacus or solitaire board, either. It comprised multiple rotating bronze cogs and gears assembled inside a self-contained box, and even came with instructions embossed onto a plaque mounted inside the wooden lid.

The Antikythera mechanism tends to put Babbage in his place, preceding him by a couple of millennia. And unlike Babbage, the ancient Greeks actually went ahead and built the bloody thing.

Fair enough, the mechanism is not a general-purpose calculating machine. Historians reckon the device was designed to calculate a variety of astronomical positions. Pointers to indicate solar and lunar locations are still identifiable, the latter revealing that its complex gears accounted for the moon's elliptical orbit.

Of course, they could be wrong. It might have been the world's first automated adult erotica device. In the days of classical antiquity, you'd probably find one on every pleasure ship cruising the Greek islands. Possibly the captain was so occupied turning his crank (as it were) that he failed to notice the rocks, hence the shipwreck.

Thus the mechanism would have represented the pinnacle of human technological achievement in its day – not to mention, it seems, the present day as well. Just add VR and turn that crank.

Still, what a disappointment. We've been anticipating the ultimate in computing tech as thrillingly described in sci-fi, only to find that someone already went and invented the wank machine in 150BC. It's enough to make you droop.

Also, it reveals much about how the human mind comprehends practical technology.

Let me introduce the Sex Gauge.

No, it's not a new device. It's a theory that if you can't work out what to do with scientific knowledge, set to work on matters relating to fornication.

That way, you'll soon find a new purpose for your aimless tech dev project and – unlike Babbage again – find plenty of investors willing to stump up with the necessary cash within your own lifetime.

For example, one of the most interesting implementations of 3D printing of prosthetics that I've seen in a while is the controllable third thumb, created as a post-grad student project at London's Royal College of Art.

Like many mind-bending but unexpectedly versatile devices, it would be inevitably doomed to failure if anyone tried to market it commercially as-is. Useful? Inexpensive? Actually works? No-one would crowdfund something like that.

Unless, of course, you apply the Sex Gauge.

Wah-hey! What couldn't you do with a robotic third thumb, eh? Wiggle wiggle? It's crowdfunding gold. Just imagine it plugged into a Lazeeva-CAM4 subscription. That'd pull hairs from the back of your head, right enough.

Well, go ahead and enjoy. Me, I'll just sit here by myself, nursing my sore shins and continuing to marvel at the astronomical prowess of the ancients. Yup, I must be a freak.

Alistair Dabbs is a freelance technology tart, juggling tech journalism, training and digital publishing. He apologises profusely to Dani Clode for referring to her extraordinary invention inappropriately for cheap laughs. He also apologises to Lazeeva and CAM4 developers for cheapening their efforts by making a series of bad double-entendres. He says he didn’t mean to stick it in.
Corrections Send us news
54 Comments

Can AI-enhanced virtual sports presenters do the job? It's a big ask

Something for the Weekend, Sir? The ball's in your park and I'm just happy for the team

Something for the Weekend, Sir? Don't worry your pretty little head about it or I'll shoot it off

Something for the Weekend, Sir? The system's playing up again. Infamy! Infamy!

Shopping online for Xmas? AI chatbots know whether you want to be naughty or nice

Something for the Weekend, Sir? 'What are you buying, Dave? We should talk about this'

The vid-confs drinking game: Down a shot of brandy every time someone titters 'Sorry, I was on mute'

Something for the Weekend, Sir? Take your brain to another dimension- sion- sion... Pay close attention

From the Department of WCGW: An app-controlled polycarbonate lock with no manual override/physical key

Something for the Weekend, Sir? Did we mention where it goes? Plus: LinkedIn trolling and other lockdown fun

What augmented reality was created for: An ugly drink with a balloon

Something for the Weekend, Sir? Or you could roll over and go back to sleep