He's got a box called Sentinel to do the job, but in April he said it was 'vulnerable' 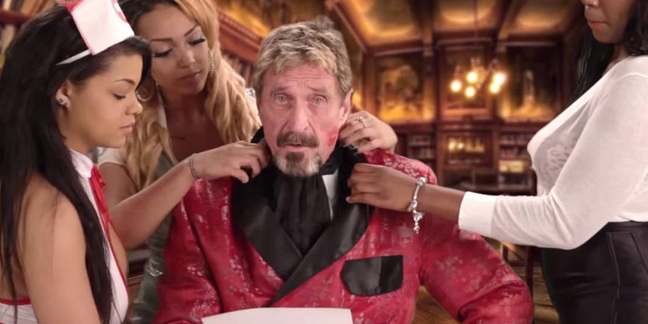 Having tilted at the US presidency without success, John McAfee has picked his last next big windmill: Google.

Speaking to totally independent Russian media outlet RT, the putative founder of antivirus as an industry and jungle adventurer named The Chocolate Factory as no less than a threat to human dignity and promised his next venture, Sentinel, is coming after Google.

“I love Google from one standpoint, that it has opened up the world to information beyond comprehension”, he said in a video he's since published on Mountain View's YouTube without a trace of irony, adding that all this information “has enriched our lives”.

What's under Macca's skin is the reduction of humanity to Google profiles: “We are not numbers. I'm not a statistic, I'm not a collection of attitudes and desires, I'm a human being with my own dreams and hopes and problems, and by making me a number, you've removed my dignity”.

(Those at the back who might think his dignity has faced bigger challenges this decade, pipe down.)

Corruption and power does not come in a flash

Google, he complains, “has taken the mantle of corporate conscience, and sacrificed it on the altar of mammon, for money”.

Explaining how a company famous for not-quite-saying “don't be evil”, he continues: “Corruption and power does not come in a flash, it comes slowly. It creeps, and as it creeps, the better instincts of the human animal are moved away by power itself, by money, by influence”.

Vowing to make Mountain View reassume what he sees as its responsibilities, McAfee said he's planning to release a product soon which he calls Sentinel.

What is it, exactly? He told RT that it's somehow going to stand between the citizen and Google's indexing:

It's the world's first anti-hacking device, I'm just two minutes away from putting in the switch to make the Google crawlers be hackers.

But in April 2017 he also described Sentinel as "vulnerable on both the server and sensor side, and was not foolproof as I had promised" after early testing. The canned statement that includes that statement describe Sentinel as "an intrusion monitoring platform designed to protect corporate and enterprise intranets from sophisticated hacking threats."

Which doesn't sound like anything capable of denting Google.

But McAfee's not interested in nay-sayers, telling RT that “I may be an old man, and you may think I've lost my energy, and strength, and my teeth, but I promise you, if things don't change I will do everything within my power to make sure that the objections of the world are laid squarely on the doorsteps of Google.”

At the very least, if he's not too busy finding his teeth, McAfee will still have some entertainment to offer the world of tech. ®

As Brit judge finds him guilty of breaching his bail conditions