With three different forms of Chinese spoken across one mega-city, smartphone translation is essential

The electronics markets of Shenzhen are bewildering. These football-field-sized buildings seemingly sell almost anything, any bit of electronics – chip, component, connector – if you know where to look among the myriad stores in the ten-storey towers.

To find find what you need in that riot of abundance you have to ask someone. But as an Australian-American lacking Chinese language skills, a question like “Do you know where I can find PIC16 microcontrollers?" doesn't have much chance of success.

Pointing works when there’s something to point at, but but lacks subtlety. It's hard to use body language to explain I want the eight-pin package, not the 14-pin chip, never mind inquire about a surface mount component or a higher speed version of a product.

The language barrier means that these amazing markets quickly become tantalising, but impossible to navigate.

I walked Shenzen's tech markets with a friend who saw me taking lots of shots with my 360° camera, then decided he wanted one of those for himself. We both imagined we found ourselves in exactly the right place on Earth to find something similar – but how do you describe such a device without using words? Pointing to the device doesn’t tell someone working in the markets how it differs from any other camera – but that didn’t keep us from trying.

At one booth, a middle-aged woman stared at my camera for a moment, then picked up her smart phone, spoke a bit of Mandarin into it, then handed the mobile over. “What do you want?" it read. She gestured to a button on the screen labeled with “English". I pressed the button and said, “I’d like a three-hundred and sixty degree camera," then handed her phone back to her. She stared at the result – a block of Chinese text – then reached behind her counter and – wonder of wonders – produced a panoramic camera. Not exactly a 360° camera, but – from the stock she had on hand – the closest match.

For five thousand years, traders have mastered the languages of the markets where they peddled their wares – from Xi’an to Venice, and everything in between. This babel of tongues acted as a barrier to trade, restricting it to those who had, by virtue of skill or necessity, mastered trading languages.

Somewhere over the last twelve months, computer translation programs have grown ‘good enough’ that they can serve as translators, grease the wheels of commerce, and make the very difficult suddenly rather easy. Case in point: my friend had an iPhone which went for a swim and never recovered, so needed both a new logic board and a new TouchID unit. That last part is significant, because unless both came together, TouchID would no longer unlock the phone (an Apple security feature preventing someone from accessing the device simply by replacing the sensor). Walking up to one of the hundreds of iPhone ‘genius bars’ in Shenzhen, my friend passed the translation app back and forth between himself and the ‘genius’ until both had agreed to the work required. Told to come back in an hour, my friend returned to find that his repairs – delicate and subtle and difficult to express – had been carried out just as he’d wanted.

Where Star Trek’s Universal Translator and HHGTTG’s “Babel Fish" worked more-or-less perfectly (revealing them as fictions), these new translation tools work imperfectly, products of machine learning systems grinding through billions of translation attempts, improving continuously for the past half decade – but they work. Anyone can now navigate the markets of Shenzhen with some confidence they can make themselves understood, even when shopping for the obscure. 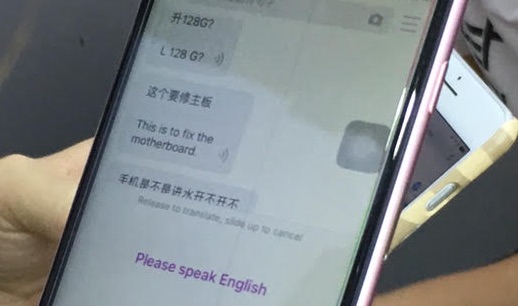 AI-fuelled machine translation in action in a Shenzen souk

Although a ‘nice-to-have’ for tourists like myself, for the Chinese universal translation will be a huge win. While it looks to foreigners like a monolithic language and culture, Chinese encompasses a range of generally-not-mutually-intelligible dialects. The hundred-kilometer distance between Guangzhou, Shenzhen and Hong Kong illuminates the nature of this problem: In Guangzhou they speak Cantonese and write with ‘Simplified’ Chinese characters, while in Shenzhen they speak Mandarin, writing the same Simplified Chinese. Meanwhile, Cantonese is spoken in Hong Kong, but they write ‘Traditional’ Chinese characters. The three cities are one vast conurbation housing fifty million souls, but are also divided by three combinations of dialect and script.

Baidu, the Chinese search behemoth, already offers an app that translates 27 languages – including several dialects of Chinese. That app, and the machine learning systems behind it, have become essential for a nation seeking unity in a diversity of tongues, paving a new ‘silicon road’ for traders both within and beyond China.

The world’s most populous nation has been connected and amplified – almost overnight – by universal translation. Perhaps that’s why the Chinese Government just announced a US$150B fund for ‘moonshot’ AI projects. They can already articulate the benefits anywhere in the country. ®