Maps to the storage stars: Who'll make it big in next 10 years?

The newbies, the comeback kids and the maturing players 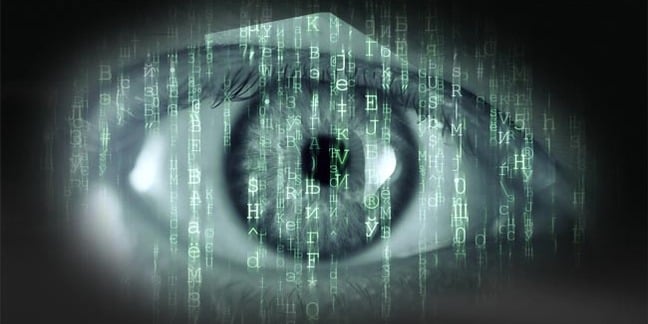 Opinion Which suppliers will be the major storage players in the next 10 years on the same scale as Dell, HPE, IBM and NetApp are today? And how will they fit into the storage landscape?

This analysis is a personal opinion and isn't based on an exhaustive review of market dynamics, supplier strategy and results and myriad CIO investigative interviews. Your humble hack has written several thousand articles about the storage scene over the year this article is the result of standing back and asking: "Where is it all going?"

If you've not got time to read the text, you can jump straight to the TL;DR section at the end.

A storage landscape sketch will set the scene: 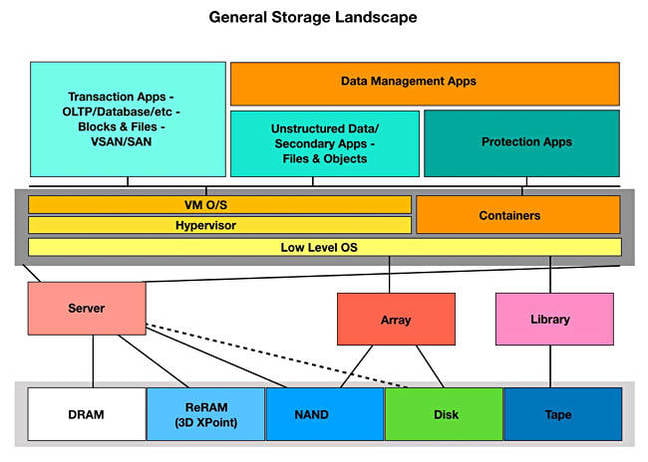 This is straightforward stuff with basic hardware components at the bottom (fastest on left, slowest on right) followed by a servers and storage device layer, then server system software and then a couple of layers of application software (transactional software with primary storage on the left, then secondary apps followed by analytics and protection apps as we move right.) The upper software layer is for the developing data management area which can extend to cover primary transactional apps, as with the eponymous Primary Data.

Down at the basic hardware component level, from DRAM to tape, the entry-level investment needed to become a major player is staggeringly huge. The El Reg storage desk reckons that today's major players in DRAM, NAND and disk will be tomorrow's major players in same – Samsung, SK Hynix, Intel, Micron, WDC and, for disks only, Seagate.

We can't see Seagate buying its way into the solid state storage area under its incumbent CEO, although we could be doing canny Steve Luczo an injustice.

Also we don't, at the moment, see Toshiba surviving as a major NAND foundry player because of its recapitalisation problems.

However, we do see one new entrant at this level, and that is China Inc. for both DRAM and NAND. We have regaled readers with articles about its investments and other moves in this space.

Moving up the stack we need another chart to help set the scene for the discussion: 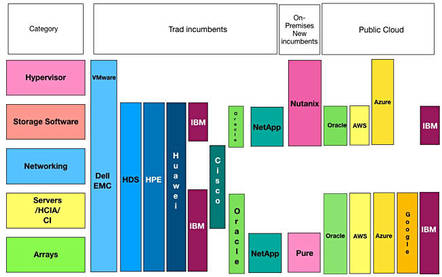 This is a busy chart. It attempts to place the major systems-level storage players ten years ahead in a crudely-defined system stack from, on the left, arrays at the bottom and then progressing up through servers - which category includes hyper-converged infrastructure appliances and converged infrastructure, networking, storage software and hypervisors.

Having storage SW under hypervisors is convenient for placing supplier boxes on the right of this column of categories.

The suppliers listed to the right of this column are in three categories: traditional incumbents; on-premises new incumbents to-be;and the public cloud players, who are already effectively incumbents today in the form of Amazon, Google and Microsoft (Azure).

Each supplier is placed inside a box whose extent up and down indicates which categories in the leftmost column we think it covers.

Starting with the leftmost supplier, we have Dell EMC with a presence in all the category boxes. Then there are HDS, HPE and IBM – no surprises – and also Huawei. We are convinced that Huawei is already a major and significant player outside the US, and its growth rate will mean it will be a world-class and world-size player in the future irrespective of any success it has in the US.

Our sense is that HDS and HPE have large enough customer bases and/or corporate resources to grow and continue to be major players respectively. Ditto IBM, which is, in our view, in a stronger strategic position relative to HDS and HPE with its IBM public cloud offering.

If Cisco makes a move into providing storage arrays, storage software directly, and/or starting its own cloud then it too will be in a stronger position.

Of the arriving and developing startups, we see both Nutanix and Pure Storage progressing to major player status in 10 years' time. This is on the basis of their strategy, products, aggressive execution so far and funding resources.

In the public cloud area, the costs of entry are also staggeringly large and so we see no new entrants, only the solidification of the position of the existing five players: Amazon, Google, IBM, Microsoft (Azure) and Oracle. It's probable that Amazon, Google and Microsoft will still outstrip the others, and that Larry Ellison's Oracle could grow beyond IBM because of that man's inexhaustible ambition and drive.

There is one suggestion we'd make. It's potentially possible that Huawei, scenting a massive opportunity, could set up its own public cloud. This is a company of boundless ambition and enormous resources.

A third chart sets the stage for a look at storage software players: 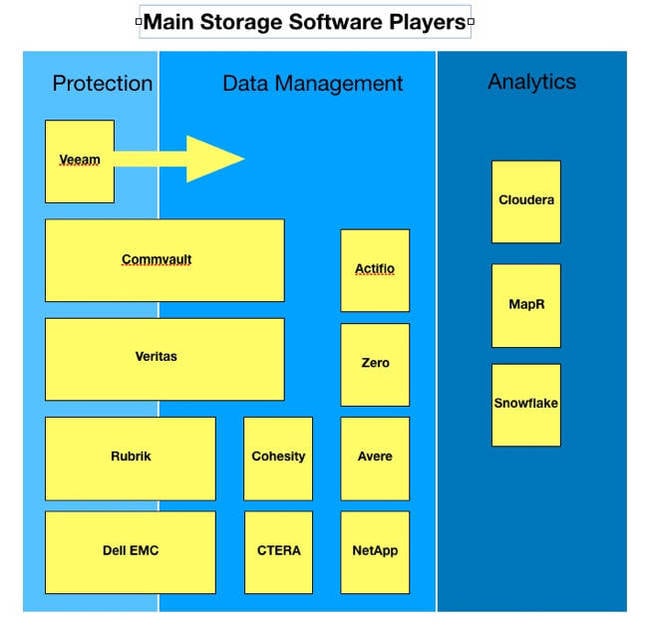 We're think we're on progressively less solid ground here as we leave the data protection area on the left and head rightwards to data management and analytics.

The existing data protection majors are Dell EMC, privatised and aggressive Veritas, Commvault and, perhaps IBM. We're confident Veeam will join these ranks, its progress having been nothing short of phenomenal.

Rubrik may join them as well, and we position this supplier as having one foot in the data protection camp and another in the data management area.

The data management area is expanding as secondary data storage grows in extent and its management needs and opportunities form. Uncertainty levels are high but we think candidate suppliers to become large and important include Actifio, Avere, Cohesity, CTERA, NetApp (with its data fabric) and Zerto. Veeam, we think, may expand into the data management space.

The absence of any supplier on this list, or in the other category areas of this article, does not mean we don't think they will make it; it means that we don't yet see any compelling evidence that they will.

In the analytics area, the area of highest uncertainty for us, our sense is that Cloudera, MapR and Snowflake will grow to become important suppliers. Others may too but we can't see clearly enough to judge that.

On-premises bridgeheads and the public cloud

A trend which we see becoming prominent is the deployment of on-premises bridgeheads for the public cloud. This is more than a simple hybrid cloud strategy with some kind of abstraction layer providing tiering between on-preises storage and the public cloud and also data management, with NetApp's Data Fabric being one such approach.

What we mean by a bridgehead is that the public cloud supplier actually has their hardware and/or software running on-premises with a seamless link to the back-end cloud. 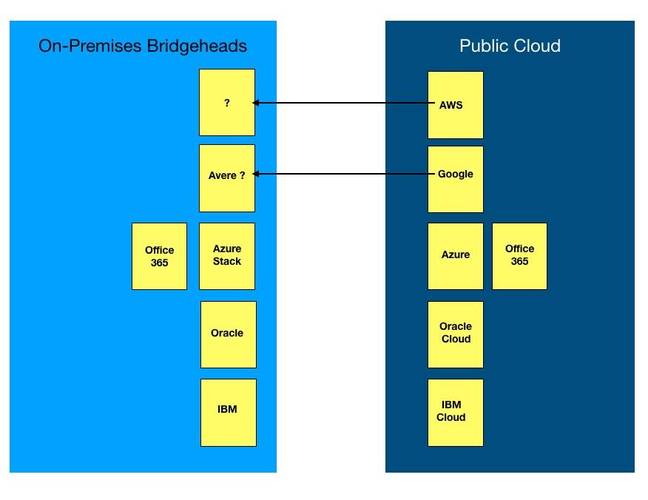 Microsoft's Office 365 embodies this approach, as does the Azure Stack product. It is our sense that Oracle, with its on-premises customer base and its growing Oracle Cloud, can implement the same scheme and cements its customer's commitment Oracle's own cloud.

We believe IBM could achieve the same thing with its public cloud offering having an on-premises gateway presence with its systems running on premises. Suppose, for example, IBM offered its DB2 database on the IBM cloud and then extended the DB on-premises software to transparently link to the IBM cloud version?

Amazon could offer an on-premises presence and so too could Google, perhaps utilising the relationship it has with Avere to make it happen.

The too long;didn't read-type summary here is that the existing memory, NAND and disk manufacturers will stay dominant, with the possible loss of Toshiba as a result of its recapitalisation woes. We feel Seagate will remain a largely disk-bound supplier, unless its CEO changes.

Nutanix and Pure will become enduring and important system platform companies. NetApp may grow and expand beyond its storage-focussed core but we'll need another one or two SolidFire-type acquisitions before we can be sure of that.

Huawei will become a major, world-class systems supplier irrespective of whether it grows a significant US presence or not. And it might start up its own public cloud.

Veeam and Rubrik will become hugely important, alongside Commvault, Dell EMC and Veritas in the data protection space and in data management. We think Veeam could move into the data management adjacency to its backup market.

Lastly, Cloudera, MapR and Snowflake are three strong bets for big league success in analytics, although this is the area in which we have the least certainty. ®

Pure Storage: You thought we were just good for hot flash? Feel our cooling hybrid cloud

+Comment Disk to disk to tape? Nah, it should be flash to flash to cloud