The Supreme Court has ruled that today's employment tribunal fees are unlawful, opening the floodgates to hacked off employees (and ex-employees) across the country.

In an application for judicial review brought by trade union Unison, the UK's highest court unanimously found that the Employment Appeal Tribunal Fees Order 2013 broke the law because it denied the public access to justice. In addition, the order was found to have discriminated against women because women, statistically, are more likely to bring employment tribunal proceedings.

The ruling will cost the government around £32m thanks to a pledge it made to reimburse all fees if it was found to have acted unlawfully.

The Fees Order was made by the Lord Chancellor, who in modern times is also the Secretary of State for Justice. In 2013 this was Conservative MP Chris Grayling.

Claimants wanting to take employment disputes to the Employment Appeal Tribunal (EAT) had to pay an upfront fee of £250 to submit the claim and £950 for a hearing, though the poorest could apply to have these fees waived. 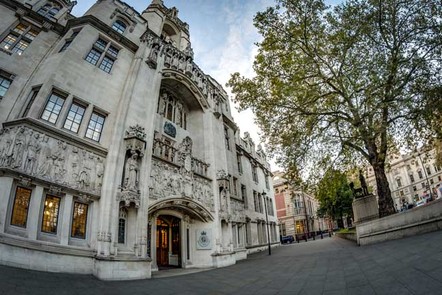 The Supreme Court of the United Kingdom. Pic: Shutterstock

Striking down the order, Lord Reed, giving the leading judgement – and who has previously sat on the EU Court of Human Rights – said: “The fall in the number of claims has in any event been so sharp, so substantial, and so sustained as to warrant the conclusion that a significant number of people who would otherwise have brought claims have found the fees to be unaffordable.”

The BBC’s graph of Employment Tribunal claims after the fees increase shows how much access to justice was damaged pic.twitter.com/WjHvAJWtA9

Ministry of Justice statistics considered by the Supreme Court revealed that there had been “a greater fall in lower value claims, such as claims for unpaid wages and unpaid annual leave, and in claims in which a financial remedy was not sought, such as claims to entitlement to breaks.”

In a display of judicial mockery, Lord Reed also included several paragraphs explaining the function of the justice system, Janet and John style, presumably for the benefit of the government:

“It may be helpful to begin by explaining briefly the importance of the rule of law, and the role of access to the courts in maintaining the rule of law. It may also be helpful to explain why the idea that bringing a claim before a court or a tribunal is a purely private activity, and the related idea that such claims provide no broader social benefit, are demonstrably untenable.”

Unison general secretary Dave Prentis said in a statement: "The government has been acting unlawfully, and has been proved wrong - not just on simple economics, but on constitutional law and basic fairness too."

The full judgement can be read on the Supreme Court website (PDF, 42 pages).

The Ministry of Justice has said it will respond publicly to the judgement. ®

Analysis Lawyers lick their lips at litigation to come

Does a .com suffix make a trademark? The US Supreme Court will decide as Booking marks its legal spot