Typing in the name "Mockridge" prompts the response: "You used a bad word: Mockridge. Please clean up the language and try again." 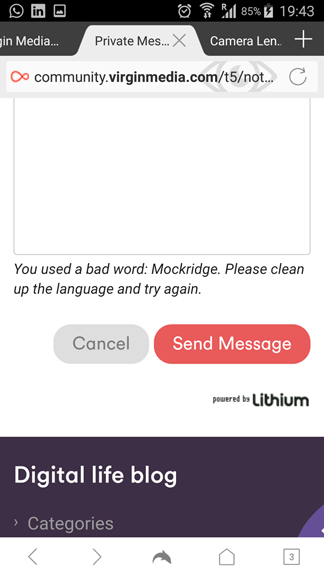 Even referring to the head honcho's email address in a private message on the community board prompts the same response, according to the screen grabs we've seen.

Bizarrely, mention of Mockridge in the public forum itself seems to be OK.

The Register asked Virgin Media if this is official policy to prevent its execs being bad-mouthed to staff, or if it is just for the chief exec. Or perhaps it's a dev just having a bit of fun...

But since then, some staff have been unhappy about the direction of the company. In a conference call last year, of which The Register saw a transcript, staff complained that Liberty Global were "faceless change drivers with no concern for the Virgin values".

Hat-tip to reader Dave for pointing this out. ®