In April, Cohesity picked up $90 million in a third funding event and wanted to expand its data platform's applicability from data protection by adding use cases "with a special focus on analytics, test/dev, file services and object services".

The software already combined on-premises data stores and public cloud data stores into one abstracted repository, managed through a single pane of glass. 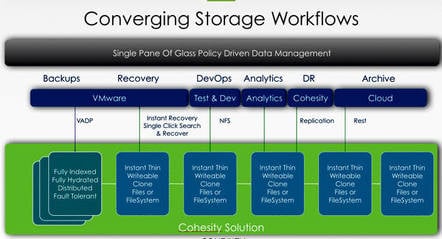 The public cloud part of the archive can be Google Nearline, Microsoft Azure, Amazon S3 and Glacier, with any S3 and NFS-compatible storage supported as well.

Cohesity's existing customers will probably welcome this v5.0 software and it will give its channel partners reasons to go calling on new customers.

A Cohesity blog provides lots of information about Orion v5.0 and the C3000. Check out a SpanFS white paper (registration required) here.

Cohesity Orion 5.0 will be generally available for all customers within 90 days.