This surf-and-turf robot swims using ribbon-like fins. And it's floated for US Navy approval

Feature In Henry Wadsworth Longfellow's poem "Paul Revere's Ride," light from lanterns served to signal how British troops would arrive at the start of the American Revolutionary War: One if by land, two if by sea.

In wars to come, US naval robots will traverse both.

At the 2017 Naval Future Force Science and Technology Expo in Washington, DC, last month, Pliant Energy Systems showed off its Agile Amphibious Swimmer (AAS1), a robot designed for both terrestrial and aquatic travel.

What makes this bot – known as "Velox" internally – noteworthy is the means by which it propels itself: a pair of undulating ribbons that function as fins, for thrust and guidance.

"It's a novel kind of propulsion," said Tom McKenna, program officer for the US Office of Naval Research's Bio-Inspired Autonomous Systems program, in a phone interview with The Register. "It's similar to the propulsion in some aquatic animals like rays and squid."

It also resembles a snake in the way it wriggles across grass, snow, and ice.

The ONR, which helps develop technology for the US Navy and Marine Corps, has contracted with Brooklyn, NY-based Pliant to develop Velox as a platform capable of moving from water to beach and back again.

That's a difficult transition. Amphibious vehicles manage it by being hovercraft or by combining wheels, for land travel, with aquatic propulsion, usually in the form of water jets or a propeller. Velox, which means "rapid" in Latin, can operate in either environment using a single mechanism for movement. 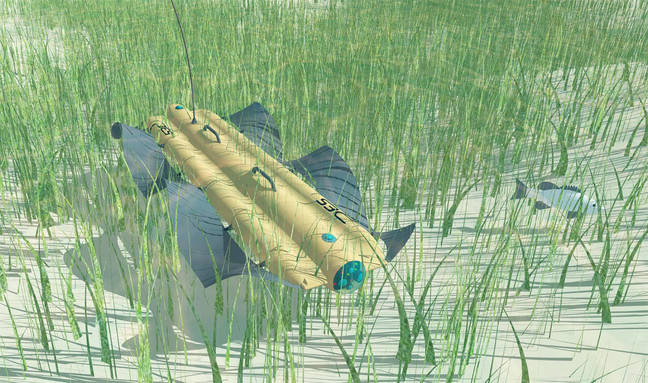 Artist's impression of the machine operating underwater ... Click to enlarge

"The robot's swimming performance alone is unprecedented outside of the natural world," claimed Benjamin Pietro Filardo, founder, CEO, and CTO of Pliant, in an interview with The Register. "But that's only half the story because it can deploy its swimming fins to travel over various land topographies in ways that don't seem to have been explored yet in the field of terrestrial robotics."

The story has a potential sequel too: Because the robot was initially conceived as an energy generation system, it has the potential to recharge by anchoring itself in a body of moving water.

Filardo explained that generation and propulsion are inverse systems, pointing to a wind turbine and propeller engine as examples. The former captures energy and the latter expends it. But propeller-driven aircraft can't recharge themselves in the wind because they're not able to harvest enough energy. The prop blades would need to be much larger for efficient energy capture.

"Because our ribbon has a very large surface area – we rely on a large, slow-moving surface area for thrust – it will also give you a large capture area for passive flow," he said.

That theoretical capability, however, awaits implementation in some future revision, once the Navy gets its propulsion system. 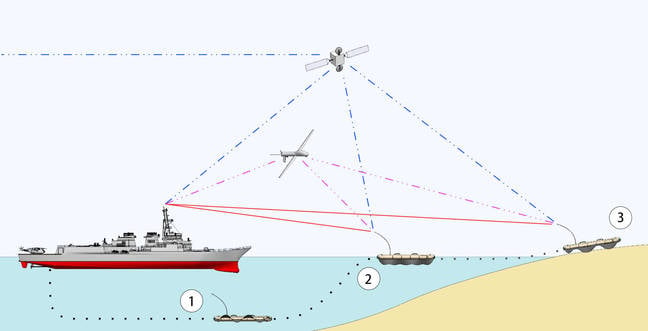 Diagram showing command-and-control paths for the robot ... Click to enlarge

Filardo noted that the Navy is interested in Pliant's technology for autonomous robots, and that at least among publicly disclosed systems, it doesn't have any robots that can move in the surf zone.

Pliant's undulating drive has other potential uses, such as moving vessels through environmentally sensitive waters.

Filardo said he began thinking about wave power in the late 1980s as a student at the University of St Andrews in Scotland, where he studied biology and oceanography.

Wave power, he explained, works well until a storm comes along and wrecks things. That got him thinking about what would survive waves and how energy might be harnessed through non-linear mechanical action.

By the mid-1990s, Filardo had a degree in architecture too, and after about a decade working as an architect, he came across SRI's work on dielectric elastomers [PDF], also known as electroactive polymers.

It's a substance that serves as a variable capacitor, Filardo said. The material allows you to generate electricity by stretching and relaxing it; and if you apply electricity to it, you can make it move. "Dielectric elastomers were the first real effort to create artificial muscles," he explained.

Filardo saw the material as a suitable non-linear mechanism for responding to an energetic environment. It could capture wave energy without linear mechanical systems like cogs, pulleys, gears, and rigid couplings. And the fact that it was a polymer meant it wouldn't have the corrosion problems of metallic components.

"In 2007, I started thinking about what is the first stage in the chain of capturing energy," he said. "What're the fluid-receiving components for a dielectric elastomer generator?"