The New Horizons probe's next destination, Kuiper Belt object 2014 MU69, looks a bit like a duck.

That's NASA's best guess after the amazing effort to fly a plane through the space rock's shadow in early July 2017, plus observations from earthly telescopes in Argentina.

After examining the results of those observations, NASA boffins now have three theories about MU69:

The agency's also issued the image above (or here for m.reg readers) to speculatively illustrate the object.

Readers may feel that image recalls the shape of Comet 67P/Churyumov-Gerasimenko visited by the Rosetta probe back in 2014. Comet 67P was also felt to be a possible contact binary, but the European Space Agency said it looked like a duck and the name stuck, at least on El Reg. 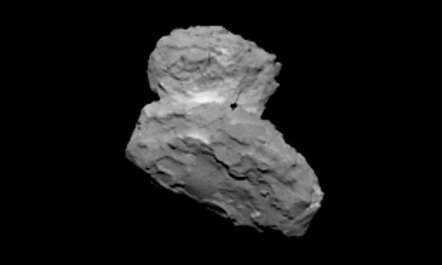 Whatever MU69's actual shape, mission boffins are chuffed that New Horizons' visit on January 1st 2019 will give us the chance to observe something other than a dull ball of rock. ®