It actually works – and could foster faster, cheaper science

Boffins have built what could be one of the world's smallest working detectors of elusive neutrino particles. 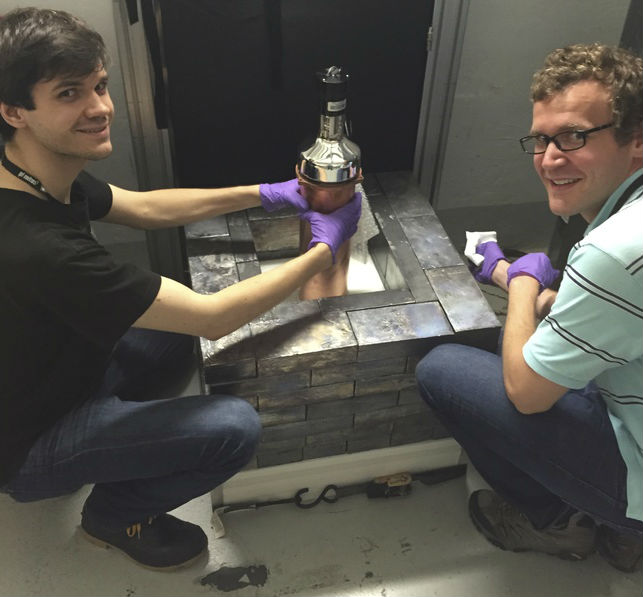 Grad students Bjorn Scholz and Grayson Rich hold neutrino detector CosI during installation. It looks like they are trying to illustrate the concept of a handheld neutrino detector, or maybe mix a martini, but in reality they're carefully holding onto it "for dear life". Pic: Juan Collar, University of Chicago

Neutrinos – elementary particles of physics – come from sources including the Sun, cosmic rays and even nuclear reactions on Earth. They can travel throughout the planet, but they're frustratingly special because you can't observe them directly. They're like ghosts – you can only detect how they interact with matter.

To measure these interactions, physicists typically use bulky detectors on the order of metric tonnes. Frederick Reines – who was recognised with the 1995 Nobel Prize in Physics for his 1956 work with Clyde Cowan on first detecting neutrinos – employed an approximately four metric tonne detector to observe the inverse of a reaction called beta decay, which is when a neutron radioactively decays into a proton, electron and anti-neutrino.

The large size of detectors is partly because some types of neutrino interactions are very unlikely, so you normally need a very large instrument to get a good view.

"We are really entering an era of miniaturized neutrino detector technology," Phil Barbeau, a particle physicist at Duke University who was part of the international collaboration (called COHERENT) that has created something much smaller, told The Register.

Chalk up: It's time for a game of pool

In a paper appearing in Science, Barbeau and his many collaborators confirmed one of the most probable types of neutrino interaction with matter – called coherent elastic neutrino-nucleus scattering – using a device with a mass of a mere 14.6kg, nicknamed CosI.

"It's expensive and difficult to build large things," Barbeau says. "You don't really want to spend $100m on an experiment when you're not really sure something's there."

Coherent elastic neutrino nucleus scattering is a lot like when you break in a game of pool. Like a cue ball's first hit, a neutrino collides with an atom's nucleus, pushes it and then scatters off.

Figure A describes the neutrino scattering effect; Fig B is a comparison of probabilities of interaction types

Since theoretical physics says it's the most probable interaction of neutrinos coming from particle accelerators, nuclear reactors or the Sun (neutrinos from cosmic rays might be more probable to have a different kind), its existence being eventually confirmed by CosI is obviously not terribly surprising, but Barbeau believes the finding could help enable cheaper physics research than has not been possible before now.

The experiment began in 2012 at the Spallation Neutron Source (SNS) at Oak Ridge National Laboratory in Oak Ridge, Tennessee.

In the cooled room of an approximately 6m steel and iron monolith at the SNS facility is a proton accelerator. Sixty times per second, 100,000,000,000,000 protons strike a mercury target with about the same energy produced as a stick of dynamite.

The protons chip away at mercury nuclei, producing neutrons (SNS's primary objective) and neutrinos (about one in every four protons produces a neutrino). Later, these neutrinos can be indirectly measured in another building using a scintillator detector, a device which produces light when hit by ionizing radiation. This light can be converted to a telltale electric signal which scientists can analyse for neutrinos.

Juan Collar, a particle physicist at the University of Chicago who worked on the CosI scintillator, told The Register that its success all came down to the experimental conditions and the right configuration.

"It's somewhat surprising that it took 40 years to experimentally demonstrate," he says – but at the same time, the detection of the nucleus recoil effect is "mighty tricky".

Yuri Efremenko, a particle physicist at University of Tennessee, Knoxville and Oak Ridge National Laboratory, spent almost two years wandering around three floors of an approximately 100m x 60m building at Oak Ridge to search for the perfect spot to detect neutrinos. The perfect spot should minimise background noise from rogue neutron radiation that could mess up the calculations and prevent neutrino detection.

"I was frustrated," Efremenko told The Reg. He spent about a year moving four 10kg, 10cm-thick, 30cm x 30cm scintillator detector boxes around the facility on carts while still seeing an uncomfortably high level of neutrons at each spot he checked.

He says that one day he met with an SNS manager, who gave him a two or three-hour private tour of the facility, including some areas that were off-access to the team for safety reasons.

For some reason, they found the perfect spot that had a negligible level of neutron noise in a 60m long, 4m wide by 4m tall basement corridor with about 12m of concrete and gravel blocking neutrons that could escape from the proton accelerator monolith.

"At the beginning we did not believe our data [on] how good this location is," Efremenko says, but "the rest is history." (The team received full access to the facility a few months after that, he says.)

Collar says the collaboration iterated through several different designs for a scintillator detector, eventually settling on CosI, a term of endearment that comes from "COHERENT" and the material it's made from: caesium iodide.

CosI is 14.6kg. Although smaller devices have been proposed and tested before (such as a 1.06kg Germanium detector for a phenomena called "magnetic moments"), the researchers say the next-smallest neutrino detector that has actually detected neutrinos – which measured inverse beta decay like the original 1956 experiment – might probably be a 377kg at the ILL reactor in France.

Next page: Thanks for the months-long delay, cross-border paper-shufflers
Page: