If we're in a simulation, someone hit it with a hammer, please: Milky Way spews up to 100 MEELLLION black holes 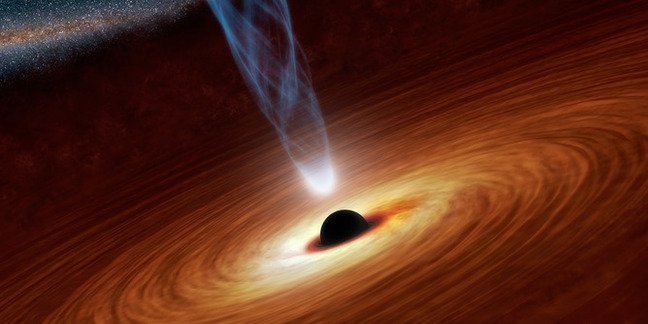 A new study shows that there may be up to 100 million black holes scattered around the dark depths of the Milky Way – a number much higher than previously expected.

That figure was calculated by University of California at Irvine physicists, who took a closer look at the gravitational waves detected by the LIGO equipment in 2015. When massive stars collapse at the end of their lives, they turn into huge black holes, and when these hefty entities collide, they produce gravitational waves that are detected by LIGO on Earth. The team followed the source of those ripples back through the galaxy to estimate there could be millions of big black holes out there.

With that number in mind, and with knowledge of how stars are distributed throughout the Milky Way and universe, it is possible to estimate the total number of black holes in our galaxy – up to 100 million, we're told.

James Bullock, a professor of physics and astronomy at the Cali uni, said on Monday:

Fundamentally, the detection of gravitational waves was a huge deal, as it was a confirmation of a key prediction of Einstein's general theory of relativity. But then we looked closer at the astrophysics of the actual result – a merger of two 30-solar-mass black holes. That was simply astounding and had us asking, 'How common are black holes of this size, and how often do they merge?'

To answer these questions, Bullock and his colleagues looked at the Milky Way's mass and its stellar metallicity – which is the amount of material heavier than hydrogen and helium that is locked up in stars. Heavier galaxies with metal-rich stars are more likely to contain stars that shed a lot of their mass and that eventually become smaller black holes. But stars with low metallicities save up more mass and are more likely to become bigger black holes. Our galaxy's stellar metallicity was key in calculating the number of black holes possible.

"We have a pretty good understanding of the overall population of stars in the universe and their mass distribution as they're born, so we can tell how many black holes should have formed with 100 solar masses versus 10 solar masses," Bullock said. "We were able to work out how many big black holes should exist, and it ended up being in the millions – way more than I anticipated."

The team's results were published this month in a paper in the Monthly Notices of the Royal Astronomical Society.

Meanwhile, scientists working at the gravitational wave detectors LIGO and Virgo are upgrading the sensitivity of their interferometers. Oliver Elbert, coauthor of the paper and PhD student at UCI, said he expected more detections, and "if the current ideas about stellar evolution are right, then our calculations indicate that mergers of even 50-solar-mass black holes will be detected in a few years." ®