Horsemen of the disk-drive apocalypse will ride upon 256TB SSDs

The end is nigh! Give it a couple of years

Analysis It's not a good week to be in the disk-drive business as solid-state tech news signals their imminent death – all due to a murderous group formed of Intel/Micron, Samsung, SK Hynix and Toshiba/WDC.

Fast 15,000rpm 2.5-inch disk drives are being replaced now by SSDs and 10K drives face the same because they are stuck at a 2TB or so capacity level. SSDs in the same format reach 11TB, 4.5 times more, and have far shorter data access times and lower rack space, power and cooling needs.

With 3D NAND use spreading, layer count heading towards 96, together with 3bits/cell TLC flash and incoming 4 bits/cell QLC flash, the price per TB of flash will not be sufficiently different from that of 2.5-inch disk for its slower access time and higher costs to be worth enduring.

El Reg considers that 2.5-inch disk drive sales will collapse in the next couple of years, accelerating a trend that is already apparent.

Higher capacity 3.5-inch disk drives spin slower, at around 5-7,000rpm, but hold a lot more data than 2.5-inch drives due to having more and larger platters. HGST's helium-filled He12 disk drive stores 12TB of data. HGST reckons that, with a shingled media technique, that can reach 14TB.

Seagate and WDC are looking to HAMR disk technology to bump this up to 16TB and on to 20TB or more in the next two or three years. They are pitching these disk drives for bulk online data storage, saying that no other technology provides the same attribute set of capacity, power consumption, reliability, access speed and cost.

But this stance is being threatened by ever-increasing SSD capacities.

In this week of the Flash Memory Summit 2017 we have seen:

With QLC flash, another layer count increase in 3D NAND, and string stacking of one 3D NAND die above another, we will surely be looking at 256TB SSDs in 2019/2020 when we might have 20TB disk drives.

IDC analysts are saying that the general solid-state drive price premium over disk should decline from 6.6x now to 2.2x in 2021.

It will not be beyond the wit of some marketeer to craft a spreadsheet formula looking at $/TB, $/power minute, $/cooling minute, $/rack space unit, and $/access microsecond, perhaps in relation to a server's virtual machine capability, to show that high-capacity flash wipes the floor with disk in terms of overall cost.

The disk drivers will say that there isn't the manufacturing capacity available to replace 3.5-inch disks with SSDs – true enough. But that is a negative and relatively short-term stance.

New flash foundry capacity is coming on stream and being planned so exabytes produced per year for flash should increase. This will happen both because SSD numbers will rise as foundry chip output rises, and also from flash chip technology advances (layering, QLC, string-stacking) so that capacity per SSD will also rise.

The disk drivers may say flash doesn't have the same endurance as disk – true enough. But when the storage is being used for bulk capacity then that data is read more often than it is written, and flash over-provisioning and controller functionality advances can lengthen an SSD's life.

The disk drivers are going to be fighting a losing battle, with the main stance being "Flash isn't as good as you think it is." The flash people will say that it is still many times better than disk, while the tape people will say, "Psst, tape is even cheaper than disk and more reliable for archives."

Here is a chart showing tape cartridge sales between 2008 and 2012: 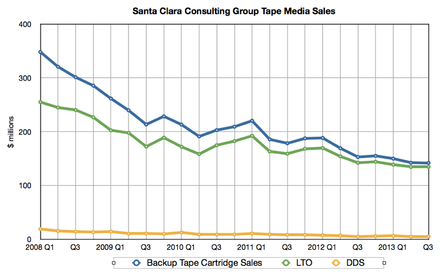 This is the likely fate of the disk drive industry, without the compensation that the tape industry is currently enjoying; tape media capacities are rising strongly, with a 330TB capacity cartridge recently demonstrated by IBM. Disk technology has little chance of reaching 100TB+ capacity levels in the next few years.

Also, for cheap, reliable archival storage, tape will undercut disk and there's no reason to suppose that tape's $/TB capacity cost and TCO advantages won't become even greater, leaving disk squeezed between tape reliability and lower cost on the one hand, and flash capacity and affordability on the other.

The El Reg storage desk can find no convincing reason why disk drive sales should not collapse over the next five years – it's started spinning out its dying years.

The future is flash and (tape) trash with the disk industry facing destruction, data's line printer killed by lasers and ink-jets. ®