We all deserve a break. Pack your bags. Four Earth-like worlds found around nearby Tau Ceti

Let's get outta here while we still have a chance

Scientists have found tantalizing signs that there are four Earth-like planets orbiting Tau Ceti, a Sun-like star just 12 light-years away. And two of those worlds could be home to life.

There has been a lot of interest in the possibility of planets around Tau Ceti, since it has a similar mass and composition as our own Sun. Previous observations revealed there may be five planets circling this neighboring star with one possibly within the Goldilocks habitable zone where liquid water could exist. That means life, as we know it, could be on that planet.

Now, a paper due to be published in The Astrophysical Journal says there may be four planets: two Earth-like in size – about 1.7 times the mass of our home world – and two super-Earths. These two super-Earths lie on the edges of Tau Ceti's habitable zone. 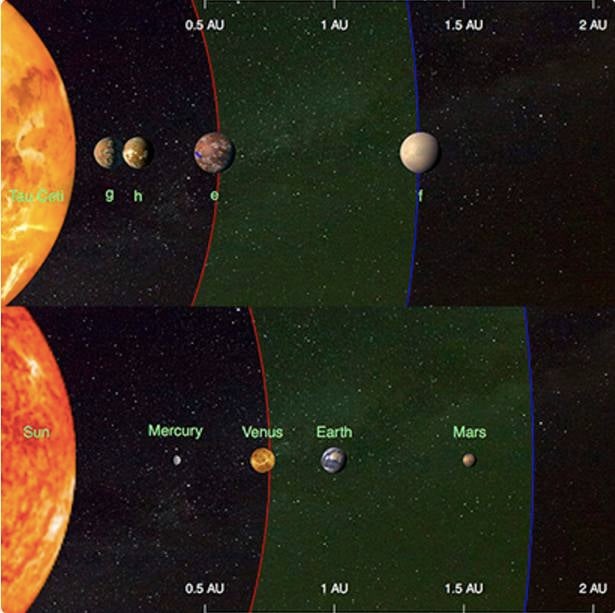 The four planets were detected using the radial velocity technique. The gravitational tug of nearby planets causes the parent star to wobble around the shared center of mass, and the resulting doppler shift in the starlight can be measured.

The method is detailed enough to detect changes in the movement of the star to velocities as low as 30 centimetres (1 foot) per second. It has allowed the team to rule out two signals that had previously been identified as planets in 2013, leaving four worlds circling Tau Ceti. More may be found and confirmed later, of course.

Mikko Tuomi, coauthor of the paper and an astronomer at the University of Hertfordshire in England, said: "No matter how we look at the star, there seem to be at least four rocky planets orbiting it."

To see whether the planets have the right environmental conditions to support life, the researchers have to improve the sensitivity of the radial velocity technique to 10 centimetres (4 inches) per second.

Although the two outer planets may have liquid water, another obstacle stands in the way of extraterrestrial life. A massive disc of dust and debris envelopes the star, and there's a good chance that the exoplanets are continuously battered by asteroids and comets. The high-energy impacts could destroy the delicate chemical processes needed to kickstart life.

The exoplanets around Tau Ceti aren't the closest candidates in the search for Earth analogs. The discovery of Proxima b around Proxima Centauri – the Sun's closest neighbor – was announced last year. Scientists working for the project Breakthrough Starshot are developing lightweight nanocrafts that can travel to record speeds in the hopes of reaching Proxima b, located about four light years away. ®