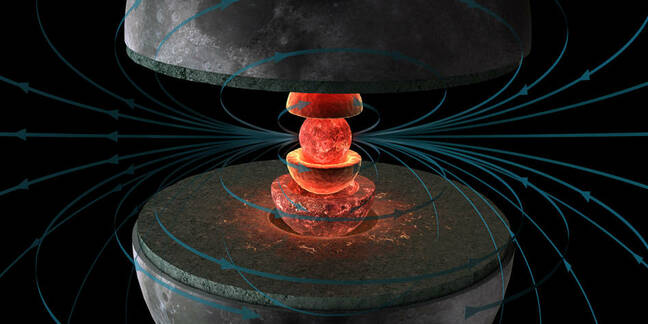 Scientists studying prehistoric lunar rocks have found evidence of a lava-lamp-like dynamo at the heart of our Moon’s metallic core that generated a long-lasting magnetic field.

The Moon samples were collected in 1971 by astronauts, David Scott and James Irwin, during NASA’s Apollo 15 space mission.

The paper's authors believe the Moon may once have had a molten metallic core. The slow churn of the liquid acted as a dynamo that powered the magnetic field around Earth's natural satellite. Benjamin Weiss, coauthor of the study and professor of planetary sciences at the Massachusetts Institute of Technology in the US, said this week the concept of a planetary magnetic field being produced by a moving liquid core “is only a few decades old.”

"What powers this motion on Earth and other bodies, particularly on the Moon, is not well-understood," he said.

How the field strength was detected

Tiny grains of material in the lunar rocks point in a certain direction under the influence of a magnetic field, just like a compass needle. The researchers built an oxygen-free oven to heat the samples close to the temperatures they formed in, and measured how the magnetization changed as the temperature increased.

"You see how magnetized it gets from getting heated in that known magnetic field, then you compare that field to the natural magnetic field you measured beforehand, and from that you can figure out what the ancient field strength was," Weiss explained.

The researchers have proposed the dynamo is a result of the gravitational pull between the Earth and the Moon. At one point, the Moon was much closer to the Earth, and the gravitational forces present may have been strong enough to rotate the Moon’s exterior, dragging its liquid metallic center into a swirling motion, thus creating a powerful magnetic field.

But as the Moon moved further away, the gravitational pull weakened and the Moon’s magnetic field started to drop. "As the Moon cools, its core acts like a lava lamp – low-density stuff rises because it's hot or because its composition is different from that of the surrounding fluid," Weiss said. "That's how we think the Earth's dynamo works, and that's what we suggest the late lunar dynamo was doing as well."

Sonia Tikoo, lead author of the paper and an assistant professor at Rutgers University in the US, told The Register on Thursday she hopes more lunar samples will be collected in future to help pinpoint when the Moon’s dynamo faded away.

“It would be great to obtain more lunar rocks, particularly from locations that were not sampled during the Apollo missions," she said. "There are several missions under development around the world – most in the proposal stage, but some beyond – that could involve a robotic sample return from the Moon in the next decade or so.

“It would be even more awesome if NASA could send more humans to the Moon but that doesn't seem to be in the cards for the near future. China is aiming to send a crewed mission to the Moon by the mid-2030s. In the meantime, scientists will continue working with the Apollo samples we already have as well as with lunar meteorites that have landed on Earth.”

The rocks have, essentially, helped scientists narrow down the timeline of the Moon’s dynamo. "Today the moon's field is essentially zero," Weiss said. "And we now know it turned off somewhere between the formation of this rock and today." ®

Atom can't tell up from down in 'quantum spin liquid'

All we wanna do is talk torque: Taiwanese boffins spin a better way to switch MRAM states

If you're looking for a textbook example of an IT hype cycle, let spin be your guide

Kiwi archaeologists cook up a record of Earth’s magnetism

What’s that in your hangi?

Scientists measure magnetic field around most distant galaxy yet

Galactic magnetism emerges early on in the universe's life

MAMR Mia – it's not just WD: Toshiba's popped to the microwave too