Scientists from the University of Washington have created synthetic DNA that produced malware of a sort.

Detailed in a paper titled “Computer Security, Privacy, and DNA Sequencing: Compromising Computers with Synthesized DNA, Privacy Leaks, and More”, the authors explain that they decided to “synthesize DNA strands that, after sequencing and post-processing, generated a file; when used as input into a vulnerable program, this file yielded an open socket for remote control.”

Lead author computer scientist Tadayoshi Kohno admits that malware-laced DNA isn't a realistic threat, but suggests there's "potential" in the future for it to be used by hackers planning to steal developing drug IP or ransom off sensitive genomic data.

"It's important to understand the security risks before they manifest," Kohno told The Register. "There aren't bad guys knocking at the door to compromise the software systems developed by this community." 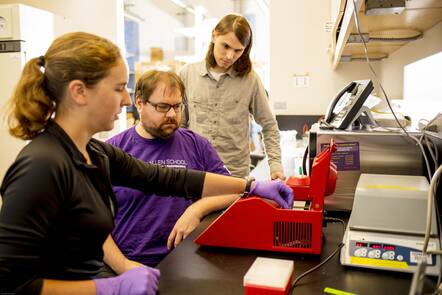 To make it work, the authors got their hands on the source code of open-source DNA compressor fqzcomp and “inserted a vulnerability into version 4.6 of its source code; a function that processes and compresses DNA reads individually, using a fixed-size buffer to store the compressed data.”

Biologists use fqzcomp to compress digital files containing strings of A, C, T, G. A simple computer command was translated into 176 DNA letters and, after ordering copies of this DNA from a vendor, the researchers fed it to a sequencing machine. After some processing, this digital file is fed to the compression program.

They manually modified the code to decrease the size of the DNA sequence input it was expecting, allowing the command in the DNA to spill over (a buffer overflow attack) and execute a program connected to a remote server with complete control over the machine. About 37.4 per cent of all reads ended up pulling off the buffer overflow.

Readers may at this point think that it's pretty easy to break software when you feed it data that you know in advance will cause it problems. The researchers recognise this, writing that they know their crocked code is “in many ways the 'best possible' environment for an adversary.”

But they also note that “fqzcomp already contains over two dozen static buffers. Our modifications added 54 lines of C++ code and deleted 127 lines from fqzcomp.” The Register imagines that kind of modification could go unnoticed in many-a-lab.

For example, the researchers also evaluated 13 open-source programs for DNA processing and found the same kind of insecurities.

But the paper also points out that synthesising any DNA, never mind stuff designed to disrupt bioinformatics software, is hard and prone to error. Even if you can do the job, you need to get the right sample into the right lab, and need to know what software that lab is running. Or get malformed software into that lab.

All of which is hard. But so was getting Stuxnet across an air-gap into an Iranian centrifuge.

Yaniv Erlich, a computer scientist at Columbia University in New York City who has studied DNA storage but was not involved in the study, told The Register that the exploit "is basically unrealistic". He says a hacker would have to precisely time the DNA exploit to when a sequencing center runs a new compression tech with longer reads for the very first time, but any centre would "rigorously test" a pipeline when any new tech arrives "so short buffers are likely to be detected ahead of time."

He said he's more worried about academic centres using default passwords on their internet-connected DNA sequencers, which could be targets for ransomware.

But Christophe Dessimoz, a computational biologist at University of Lausanne in Switzerland who was also not involved in the study but has studied DNA storage, told The Register that the authors are correct that the "general security hygiene of bioinformatics programs is very low".

"Current tools have been developed to handle natural DNA sequences, which are not expected to contain code executable by computers," he added. Although not surprising, "The work is a nifty stunt."

The authors' main recommendation is that bioinformatics software just hasn't been written with this kind of attack in mind, but seeing as DNA is information encoded in chemicals the authors of such software should wise up to the risks they've demonstrated.

Kohno, who is next studying regulations around DNA sequencing and analysis pipelines, believes it's possible there are other exploits that could take advantage of DNA. He said that while some researchers might not find it surprising now, "hindsight is always 2020".

You can find the paper here [PDF] and the University's explainer and FAQ here. The team will present their peer-reviewed research at next week's annual USENIX Security Symposium in Vancouver, British Columbia, Canada

The second document tries hard to point out that this is all theoretical. “We have no evidence to believe that the security of DNA sequencing or DNA data in general is currently under attack,” the primer says. “Instead, we view these results as a first step toward thinking about computer security in the DNA sequencing ecosystem.” ®

Here, the University of Washington's interdisciplinary team of biologists, computer security and DNA processing pipeline experts used synthetic DNA to take down a system. But is it possible that natural human DNA could also accidentally take down a biological research computer system someday?

We asked some of the researchers if it would be possible.

They thought about it and said it's "unlikely"...