Like it or not, it's back to Google for now

Visitors to Bing were hit with HTTP 503 error messages. We note that, while Bing appears to be working again as we write this, it's feeling a little slow. (Reg readers also dropped us tips that status.bing.com and portal.microsoft.com both appear busted, but these aren't websites folks can normally use at any time.)

DuckDuckGo said its problems with both Bing and Yahoo! were slowing its own operations. It should be back to normal by the time you read this.

UPDATE: it is related to outages at Bing and Yahoo. We've temporarily routed around them and are serving results from other providers.

Microsoft, meanwhile, acknowledged there was a problem with its search engine, though Redmond didn't have much to offer in the way of details.

"We're working to resolve the connectivity difficulties some customers may be experiencing when connecting to Bing," Microsoft's spokesperson said. 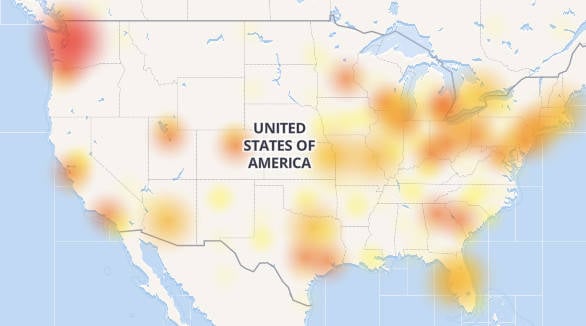 A map of the Bing outage as captured by DownDetector

Yahoo!, meanwhile, did not return a request for comment through its Oath parent company, though monitoring site DownDetector did note 'possible problems' with the search engine.

The outage did not appear to impact other Microsoft services, including Azure, Xbox Live, and Office365, apart from the portal failure.

One obvious way to avoid the problems is to use Google search, which was not impacted by the outage. Given the Chocolate Factory's roughly 90 per cent share of the search market, the vast majority of users may not even realize there was any sort of outage. ®

"We’ve resolved the connectivity difficulties some customers may have experienced," a Microsoft spokesperson told us later today regarding Bing.