How to build your own DIY makeshift levitation machine at home

All you need is a 3D printer, ultrasonic transducers, an Arduino, patience...

Engineers at the University of Bristol in the UK have published a rough guide to building a simple levitation chamber that uses sound waves to suspend objects.

Performing levitation experiments requires careful laboratory equipment and conditions. But a paper published in the Review of Scientific Instruments this month shows how it can be done within the confines of your own home.

Levitation is not only fun to play around with, it can also help scientists improve accuracy of measurements.

Dr Asier Mazo, coauthor of the paper, and a Bristol uni researcher, said: “Levitating samples in mid-air can improve diagnosis from blood samples and detection of the structure of molecules. Usually a sample on a microscope slide is illuminated with x-rays, lasers or another type of radiation so the reflected radiation can be analyzed. However, no matter how transparent the microscope slide is, it will always interfere with the test. On the contrary, if the sample is levitated, all the reflections are going to be from the sample.”

The academics have found a cheap way to build what they call a TinyLev. Using a 3D printer, commercial ultrasonic transducers, some amplifier circuits, a 20V supply, and a simple microcontroller kit or Arduino board, the levitator can be built, emitting 40kHz waves on a single axis. 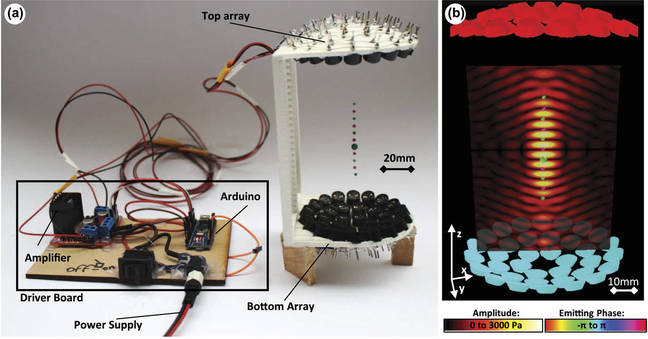 A model of the TinyLev ... click to enlarge. Image credit: Marzo et al.

Both ends, top and bottom, are arrays of transducers sitting in 3D-printed sockets. They convert electrical energy into acoustic waves, with the current controlled via the motor driver amplifier attached to the Arduino board.

The acoustic waves from the top and bottom of the levitator push the particles in both directions and trap small objects with a density greater than 2.2 grams per centimeter cubed and 4mm in diameter. It consumes about 10W of power.

The engineers have demonstrated it by suspending drops of liquid to levitating insects.

“Acoustic levitation has been explored in hundreds of studies for applications in pharmaceuticals, biology or biomaterials," Mazo said.

"However, historically levitators have been restricted to a small number of research labs because they needed to be custom-made, carefully tuned and required high-voltage. Now, not only scientists but also students can build their own levitator at home or school to experiment and try new applications of acoustic levitation." ®