Is that 2TB in your pocket or are you just pleased to see me?

Samsung has introduced a 2TB T5 portable SSD you can stick in your shirt pocket.

It comes in metallic blue with 250GB and 500GB capacities and black for 1TB and 2TB versions. It measures 74 x 57.3 x 10.5mm and weighs 51g, although precise weight varies by capacity. That's smaller than the average portable disk drive. 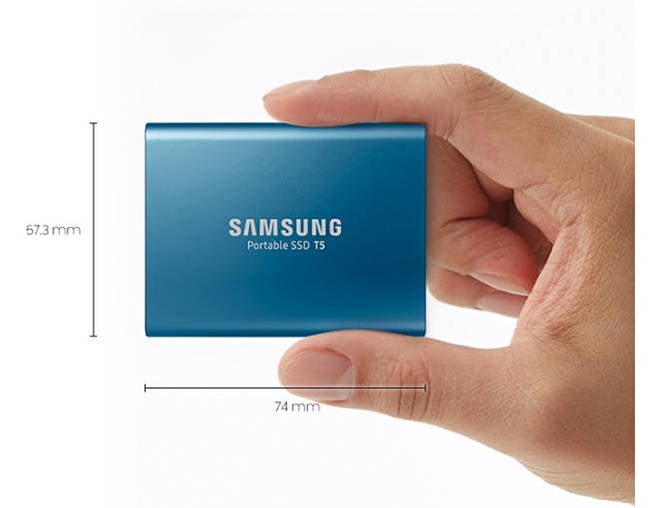 This pocket rocket uses Samsung's V-NAND-branded 64-layer 3D flash and hooks up to hosts with a USB 3.1 Gen 2 interface, providing transfer speeds up to 540MB/sec using USAP mode. So a fully loaded T5 would take just over an hour to stream off its contents to a host.

Sammy says this is up to 4.9 times faster than its own 500GB external disk drive can stream data. A 3GB full HD movie would be transferred in seven seconds and a 4.8GB 4K UHD movie would transfer in 12.

Samsung's previous T1 portable SSD stored up to 1TB of data, using 32-layer V-NAND, and transferred data at up to 450MB/sec. The T5 is both bigger and faster.

The device has AES 256-bit hardware encryption and optional password-protected access, plus a three-year warranty. It comes with Windows and Mac software plus a mobile app on Google Play for Android phones and tablets. There are included USB Type-C to C and USB Type-C to A cables in the drive kit. It's shock-resistant to a two-metre drop.

We would expect Seagate and Western Digital to come out with their own equivalent 2TB or larger SSDs soon enough. Western Digital's My Passport SSD runs up to 1TB presently and has a 45 x 90 x 10mm form factor. It has a USB 3.1 interface, 1.98m drop shock resistance, and a three-year warranty too. Amazon sells it for $399.99.