The 65,000-tonne aircraft carrier entered the port at 0710 this morning under the watchful eye of half a dozen tugboats, a small flotilla of police vessels - and crowds of thousands lining the sea front along Portsmouth and Southsea.

In addition, scores of smaller civil vessels accompanied the carrier at a respectful distance. A flypast of Royal Navy helicopters and fast jets - Hawk training aircraft - also took place as the carrier made her stately way towards the naval base. 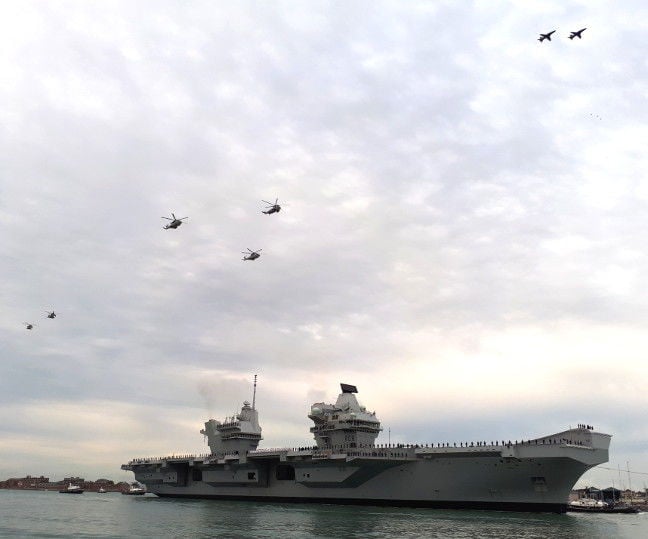 Admiral Lord West, the former head of the navy and now a Labour Party peer, told The Register as the ship came in: “This is a very joyous day. She looks splendid. We had lost sight of our maritime capability. This is something very special for Portsmouth and the Navy.”

When asked if the Queen Elizabeth-class carriers were necessary, the admiral said: “The one thing you can’t guarantee is what will happen tomorrow. When they’ve got their fixed wing assets, they’ll be one of the only capabilities [the UK has that will have] a strategic impact. It’s 4.5 acres of British sovereign territory.” 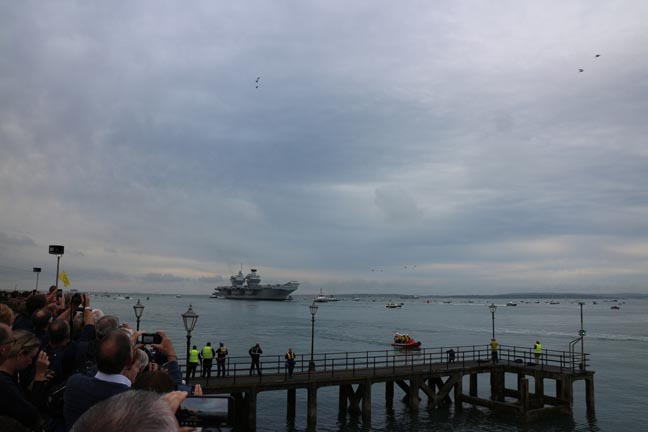 The £3.5bn carrier, and her £3bn sister ship, HMS Prince of Wales, will both be based at Portsmouth. Each ship will take it in turns as the on-duty vessel.

Lieutenant Commander Neil Twigg, a Royal Navy pilot who flew Harriers from the UK’s last carrier, HMS Illustrious, and who had completed a three year exchange with the US Navy, flying F/A-18s, described the task of integrating the new carriers, their F-35B Lightning fighter jets and their Merlin helicopters as “quite a challenge”, adding: “Once we see the jets arrive on board next year, it’ll be able to operate seamlessly.” 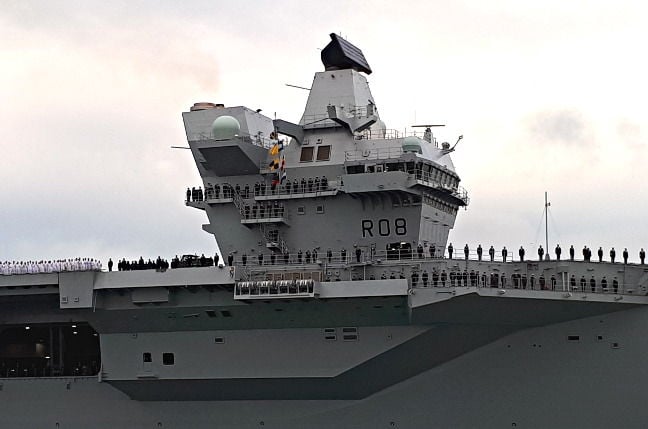 According to Lt Cdr Twigg, the carrier’s operational practices will be a blend of American and British drills, drawing on British experience with the Harrier jump-jet and current US operational doctrine.

HMS Queen Elizabeth has no catapults or traps for launching and landing fixed-wing aircraft, unlike US Navy ships.

Instead, her F-35B jets are so-called Short Takeoff and Vertical Landing (STOVL) aircraft, using the vertical lift fan mounted in the airframe to provide vertical lift and so shorten the takeoff run. Routine landings aboard ship will be vertical.

After the ship had entered the harbour and safely berthed alongside at Portsmouth Naval Base, Admiral Sir Philip Jones, the First Sea Lord, made a speech.

The professional head of the Royal Navy welcomed the ship, her crew, and the hundreds of engineering contractors aboard her from the Aircraft Carrier Alliance.

He also thanked the US Navy, US Marine Corps and the French Navy for helping sustain Britain’s “seedcorn” of experienced carrier personnel. 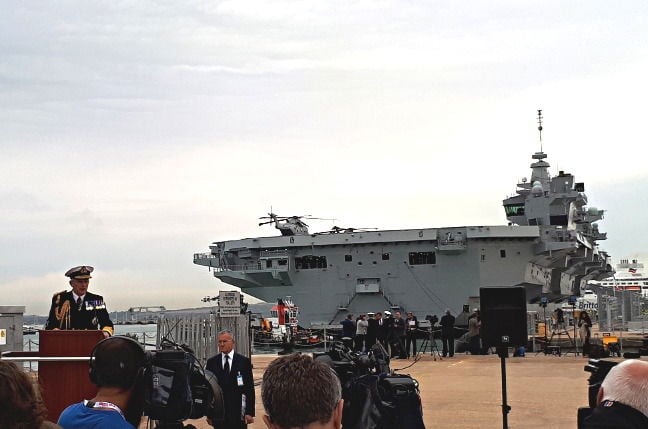 “She will be the embodiment of Britain, in steel and in spirit” - Admiral Philip Jones RN

Wing Commander Reg Roberts, the sole Royal Air Force officer currently attached to Navy Command HQ, told us that the new technology aboard the two carriers is intended to future-proof her: “It’s a bit like your iPad. You don’t know what you’ll be using it for in two years’ time. Combined with the F-35… her future uses will be exploited to the full.”

Although today is a proud day for the Armed Forces, Portsmouth and British engineering, it is important not to lose sight of the bigger picture. While the carrier herself is a floating monument to what British industry can do when the money and the will are both available - Capita, for example, installed 14,000 IP connection points aboard the ship as well as the main round-the-ship fibre optic network - finding the manpower for the 700 or so permanent crew of each ship has stretched the Navy considerably. 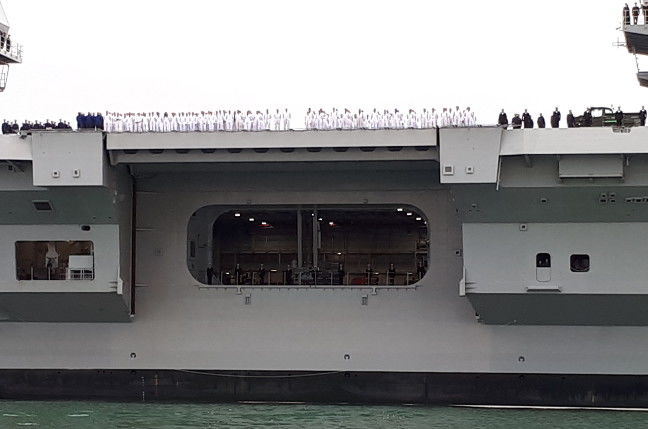 White-suited engineers from the Aircraft Carrier Alliance pictured on HMS Queen Elizabeth's starboard lift. The effort to build the two carriers created, directly and indirectly, around 10,000 jobs around the UK

In addition, planned buys of other ships have been cut back, most notably the halving of the Type 45 air defence destroyer order from 12 to six ships, and the one-third cut in future Type 26 anti-submarine frigate orders.

While capable, Big Lizzie, as her crew have reportedly nicknamed their ship, will never operate alone. Time will tell whether the effort of putting her and her sister ship to sea will tip the fleet out of balance. ®

The UK Hydrographic Office used the smallest commissioned "ship" in the Navy, Her Majesty's Survey Motor Launch Gleaner, to precisely map the channel which the carrier must follow into and out of the harbour so her 11 metre draft doesn't foul the sea bed. The video below is a visualisation of the survey results.