HPE is hiking server memory prices by up to 20 per cent from today, according to communications with the channel, seen by us.

The background is that the industry is recovering from a global DRAM shortage and consequently the component has become more expensive.

In an email about the changes sent to trade customers, HPE stated: "On Monday, August 21, HPE will raise the list prices of older and low volume memory SKUs by approximately 10 per cent to 20 per cent."

The following memory will be impacted:

In the mail HPE reassures its channel about its competitiveness:

Regarding the competition, these are SKUs used on older and low volume servers. Dell no longer publicly sells DDR4 133MHz speed memory nor DDR3 memory. Therefore, this action will not impact our competitiveness in the market.

It's interesting that HPE seems only concerned about Dell with other server suppliers, like Cisco, Lenovo, Supermicro, etc, not mentioned.

The US vendor also said: "At this time we are not raising the list price of DDR4 2400MHz (Gen 9 Broadwell) and DDR4 2666MHz (Gen 10) memory. However, costs from HPE suppliers are continuing to rise on these products and there may still be a need to raise list prices for these products in the future. Below are the details of the products being changed." 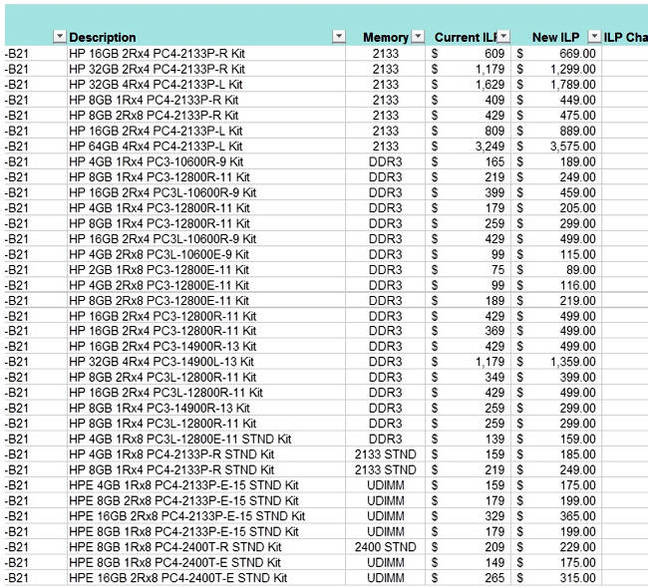 A spokesman told The Reg: "HPE, like any other international company, adjusts prices based on a number of market factors. After careful consideration, we may decide to make adjustments to our pricing."

Research by DRAMeXchange analysts indicated the global average sales prices (ASPs) of PC and server DRAM products rose by more than 10 per cent sequentially in the second quarter.

Avril Wu, research manager of DRAMeXchange, said: "Suppliers do not appear to have plans to expand their production capacities in a significant scale between now and the end of the year."

DRAM makers have certainly benefited from the shortages and subsequent price hikes, reporting record takes in Q1 and Q2. ®