Voyager antenna operator: 'I was the first human to see images from Neptune'

Remote work and automation is about to see Voyager-listeners' work change, but our man says tuning in is still a thrill

When Richard Stephenson drives to work, there's a chance that later that day he'll become the first human to see new details of Mars, a moon of Saturn, or the far reaches of the solar system.

Stephenson's seen plenty of such firsts because his job as an Operations Supervisor at the Canberra Deep Space Tracking Complex means it's his responsibility to track humanity's most distant spacecraft. Voyager 2 is in his care, along with Cassini, New Horizons, MAVEN and several lower-profile missions. The ESA's Rosetta comet exploration mission also crossed his desk until its timely demise, while Mars Rovers are often on the menu.

Stephenson has a particular fondness for Voyager 2, as he was hired and moved to Australia to help track Voyager 2's 1989 encounter with Neptune. That visit came 12 years after its launch 40 years and a day ago. That it remains humanity’s only close encounter with the planet is a testament to the durability of the Voyagers and the outstanding and astounding achievements the missions represent.

I love the @NASAVoyager spacecraft like a favourite aunt but every time I get a briefing for a @CassiniSaturn event the jaw drops in awe pic.twitter.com/v6C2urUX8n

“With Neptune we were getting pictures back in real time,” he recalls. “Every day you would come in on shift and see both getting just a tiny bit closer.” Sometimes Stephenson would find himself in the company of just one or two others as they witnessed views of the ice giant that no human eye had previously beheld.

“I was sitting in front of a chart looking at atmospherics,” he says. “I saw it a few seconds after the images downloaded.”

Little wonder, then, that Stephenson told The Register he sees his career as “one memorable event after another. I have been involved in so many big missions for 30 years.”

Helping to make his career extra special is that Australia's the only place from which Voyager 2 can be observed. The Canberra Complex at which Stephenson works is the Australian node of NASA's Deep Space Network. The other two are at Goldstone, California, and near Madrid, Spain. As the Canberra complex is the only one in the Southern hemisphere, it gets plenty of work. It also gets all the connections to Voyager 2, which took a sharp southern turn years ago and can only be reached from Canberra.

Communicating with far-flung spacecraft needs big antennae and the Canberra facility has several: a 70m behemoth is its most sensitive instrument, but a pair of 34m dishes can be coupled to similar effect. The 64m Parkes radio telescope, about 300km away, can also be co-opted to receive data.

Stephenson's job sees him ensure the station's antennae are ready for actions when far-flung spacecraft are in position to chat with Earth.

He knows what to do because the Jet Propulsion Laboratory sends him a schedule..

“A project will come along that says I will need so many hours, this many on the 70m and this many on the 34m,” he explains. As the complex has finite resources he says “There's a bit of conflict resolution to be done, but that is sorted out months in advance.”

The result of that wrangling is his daily to-do list of “connections” he and his team of four need to make. Before each connection, the complex is re-configured for the job, with transmitters, antennae and all required resources brought online and/or brought into desired configurations and tested.

One critical job is getting the antennae into position: Canberra's 70m dish weighs 8,000 tonnes, half of which can move. A hydrostatic bearing helps it all to get moving: the antenna floats on a thin film of oil, beneath which hydraulics move to get the antenna pointing wherever it is required to go.

There's a deadline for each connection and it can't be missed, as doing so might mean missing data. That's bad news if a spacecraft has planned a data dump, which happen when they're in orbits that occasionally bring them close to Earth. When spacecraft make those close approaches, they empty their data stores at quite high bitrates, then sail back into the void and communicate more slowly, while storing data for their next close approach. 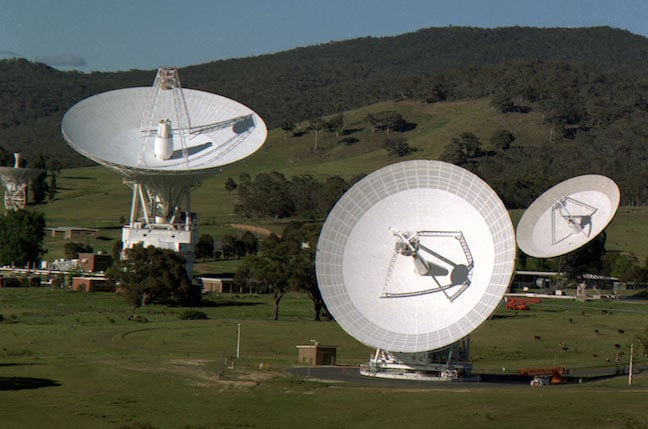 Communication speeds vary. Stephenson says the Mars Atmosphere and Volatile Evolution (MAVEN) mission can trickle in data at ten bits per second. Even Voyager 1 can beat that, regularly hitting 160 bits per second and reaching 1,200 bits per second when emptying its memory.

Antennae make the difference: the Voyagers' are high gain, MAVEN's isn't. So even though Voyager 1's signal comes in at -168dbm it's easier to reach than other probes. Kepler, which is not far from Earth, talks to Earth on its low gain antenna in the mid 160s dbm when it is busy peering at exoplanets and just sends housekeeping data on its secondary antenna.

Stephenson says each of the spacecraft he tends has its own idiosyncrasies. Voyager 2 experienced a capacitor failure early in its mission that left its main radio inoperable and has meant that Stephenson and his team need to figure out what frequency to use when communicating with the craft.

Understanding just how to tickle each craft just right is one of the skills of his job, but also a skill he worries will soon become less relevant because the Deep Space Network will soon move to a follow-the-Sun operation. Today, Canberra and the other two sites are staffed 24x7, with crews of four or five on duty.

Rise of the machines

When the new regime kicks in, crew sizes will increase to nine, but that team will operate all three nodes of the network thanks to increased automation.

“We are now heavily dependent on automation,” Stepheson says, although nothing happens without a human initiating the action. “You will always need a controller who can identify the issues, but I can see that in five to ten years that might change, too.”

Other changes he sees coming include upgrades to the Network's telescopes. They needn't necessarily be made any larger, as improvements to low-noise amplifiers and software to process signals offer the chance to improve accuracy. Canberra's amplifiers are already cryogenically cooled to 4.5° kelvin.

Desktop upgrades are also on the agenda. Stephenson said he uses a Solaris workstation running version 8 of the OS. Linux is making inroads as Sun kit becomes harder to rely on.

The Voyagers, too, are becoming less reliable, but Stephenson hopes to stick around to help them keep communicating, if only because it's a pleasure to come to work in the bucolic atmosphere of the Canberra complex, which nestles in a small valley that feels a thousand miles from care but is just a 20-minute commute from the city's suburbs.

“Of the three stations it is the most picturesque,” Stephenson says. “You feel like you are working in the country. And when I go for a walk at 3AM and look up at the stars, it is quite special.” ®