Deaths of sailors prompt admirals to halt all warship ops 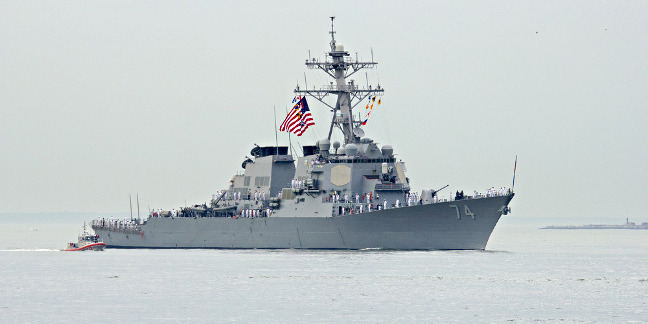 The USS McFaul, an Arleigh Burke-class destroyer similar to the two warships in the latest incidents. Pic: Shutterstock

The accident-prone US Navy has suspended all of its warship operations around the world following its third collision at sea this year.

The latest incident took place between general-purpose destroyer USS John S McCain and a Liberian-flagged oil tanker, the Alnic MC, off the coast of Singapore, where the American warship was due to make a port stop.

Photos of the warship after the collision (such as those on The Guardian website) clearly show the impact of the tanker's bulbous bow on the destroyer's side. Five sailors were injured and ten were listed as "missing" after the collision.

At the time of writing a body had been found by the Malaysian Navy, and human remains had been identified inside the damaged section of the destroyer, as acknowledged by US Navy Admiral Scott Swift during a press conference today, but these had not been formally identified.

News reports indicated that the McCain may have suffered a steering gear defect that left her broadside on a main shipping channel, though accounts vary as to what happened and how. There appears to be no evidence to support theories that the ships may have been hacked, though investigators are said to be considering all possibilities.

Admiral Swift confirmed that all USN Seventh Fleet ships would be "stopped by August 28", in line with an order from the chief of the American Navy, Admiral John Richardson, to cease all operations. During the "pause" US Navy investigators would be "focused on navigation, ships' mechanical systems and bridge resource management", according to Admiral Swift.

Though the admiral said he had visited the McCain and denied, in response to reporters' questions, that her crew were overworked ("I didn't see a crew taking a knee, so to speak") his comment about bridge resource management may reveal the initial direction of the investigation into this latest collision. A modern warship like the McCain, an Arleigh Burke-class destroyer, is packed with radar and passive sensor systems. There is no reason why her command team could, or should, have been so unaware of other ships nearby.

The Chinese stuck their oar in, with a state-run propaganda outlet using the incident to label the US Navy "a growing risk to commercial shipping". This is mainly because the Chinese resent USN freedom-of-navigation operations around the South China Sea, large chunks of which China wants to claim as its own territory rather than leaving it as international waters.

A couple of months ago, the US Naval Institute suggested that the USN change some of its practices. These ideas included turning on the ship's automatic identification system (an onboard beacon that broadcasts the ship's location, direction and speed), additional training in the use of automatic radar plotting aids for USN watchkeepers.

"In the commercial world, deck watch officers complete a similar course," noted the institute. It also recommended that the USN buys display systems that integrate all of the various sensor outputs onto one screen, rather than relying on humans to mentally integrate multiple screens, something it notes "may lead to mistakes".

CNN noted that the USN has suffered four maritime mishaps this year, including three collisions and one ship running aground. The most recent collision involved the USS Fitzgerald, another Arleigh Burke-class destroyer, and cost the lives of seven sailors. Her captain, who was injured in the collision, was sacked along with his second-in-command and the ship's most senior non-commissioned officer. ®