NSA enters stage two of its spying revival plan: Getting Trump onboard

Oh look, the Privacy and Civil Liberties Oversight Board is being revived 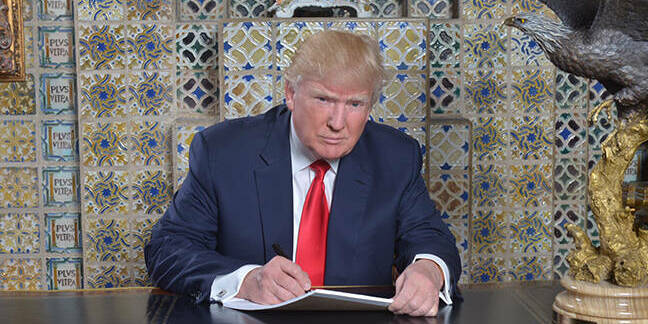 Uncle Sam's intelligence agencies have embarked on the next stage of their plan to retain spying powers over US citizens: getting Donald Trump onboard.

Knowing what we do about Donald's approach to policy issues, it seems unlikely that the American president is aware of what is going on. But somehow he has been persuaded to revive a civil liberties oversight body that was torn apart for criticizing a controversial spying program that requires reauthorization by Congress at the end of the year.

The Privacy and Civil Liberties Oversight Board (PCLOB) has been dead for over a year. After it concluded that several of the NSA's spying programs were unconstitutional back in 2014, the intelligence services set about shutting it down. And they succeeded.

In 2016, Congress passed legislation that formally prohibited the board from reviewing covert activity, and gave politicians budget control over the board, requiring it to report directly to legislators.

In response, most of the PCLOB's staff and board resigned. Between January and March that year, three board members quit and a fourth's term was not renewed. That left a single person – Elisebeth Collins – to sit as chair.

Collins' position was renewed until 2020 with the entry of the Trump Administration in order to keep the PCLOB in existence, but the board has not done a single piece of work since its former chair David Medine resigned in March 2016. With no quorum of board members present, and no executive director, the PCLOB has been in stasis for 18 months.

This month however – and on the same day that the NSA started a PR campaign to retain mass spying laws under Section 702 of the Foreign Intelligence Surveillance Act (FISA) – President Trump suddenly decided to nominate a new chair to the PCLOB. (The PCLOB has a few choice words [PDF] about Section 702.)

"Adam I Klein of the District of Columbia to be a Member and Chairman of the Privacy & Civil Liberties Oversight Board," said the announcement, buried at the bottom of a four-appointee announcement that was put out with the trash on Friday.

It then lists Klein's achievements: "Mr Klein is the Robert M Gates Senior Fellow at the Center for a New American Security, where his research centers on the intersection of national security policy and law. He previously served as a law clerk to Justice Antonin Scalia of the US Supreme Court and Judge Brett M Kavanaugh of the US Court of Appeals for the DC Circuit. He has also worked on national security policy at the RAND Corporation..." and so on.

In the context of the PCLOB however, what Mr Klein is renowned for is his defense of Section 702 of the FISA Act.

He even wrote an op-ed for The Wall Street Journal just last month that defended the most controversial aspect of the spying program: the ability of the FBI to search a vast database of information on US citizens that was compiled using Section 702 – a law that explicitly notes it is only to be used for foreign intelligence targets and exempts US citizens.

Klein claims that, despite the law, "keeping officials from searching this data would make it more difficult to prevent homegrown terrorist attacks."

His choice as chair of the PCLOB goes against everything the body is supposed to represent, and is akin to Trump's choice of climate-change denier Scott Pruitt as the head of the Environmental Protection Agency, or Rick Perry as head of the Department of Energy after he publicly vowed to eliminate the government agency.

The NSA and FBI also know exactly what they will be getting with Klein heading up the PCLOB: a civil liberties fig leaf to continue their spying of US citizens using legislation explicitly designed not to include US citizens.

The legislation in question has to be reauthorized by Congress before the end of the year, and has already become a major political wrangle in the corridors of power. Many lawmakers, tech companies and civil liberties groups have argued for specific changes to make to the law to remove its worst aspects.

With the revival of the defunct PCLOB and the proposed appointment of Klein as its chair, it is clear that the powers-that-be already have a strategy in place to retain their powers, and are following through on it. ®