He became Western Digital's CEO in 2012, coming in from running the acquired HGST disk and flash drive operation, and replacing the retiring John Coyne. Since then he had to wait till this year before WDC could fully integrate HGST into its own operations. In the meantime WDC bought SanDisk for a massive $19bn in October 2015.

A quick look at the acquisition history here shows the complicated way the modern WDC has come into being. WDC is:

All this means WDC needed to integrate its own disk drive operation with HGST's disk and flash drive business, and with SanDisk's flash chips and SSD business.

What we are seeing is the emergence of this kind of business structure: 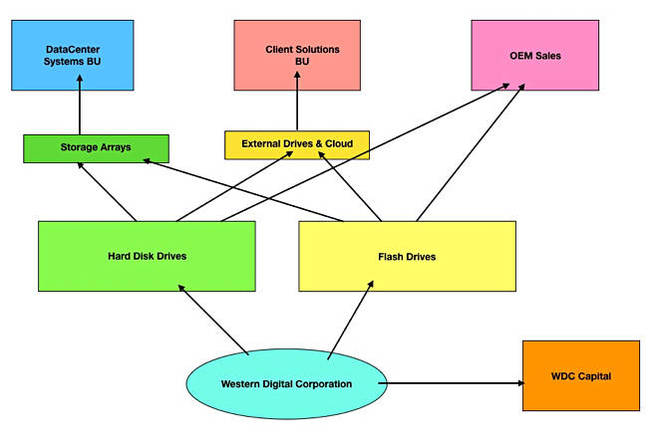 There are three layers. At the bottom is the WDC entity with its investing WDC Capital arm.

Next up in a second layer are the two media manufacturing business. There is a vertically integrated set of disk drive manufacturing plants which pump out millions of 2.5-inch and 3.5-inch disk drives a year.

There is also a flash foundry business, operated with Toshiba and acquired with SanDisk. It pumps out millions of flash chips which go into flash drives; this being another vertically integrated operation.

DataCenter Systems is run by SVP and GM Phil Bullinger and sells storage array systems. There are two strands to this, the first being big data and active archive arrays under the ActiveScale and ActiveArchive brands – secondary storage in other words.

Tegile with its hybrid and all-flash arrays will provide the primary storage complement to the secondary storage products.

Milligan's WDC is a fervent believer in vertical integration, with the disks and flash drives being made in-house from raw components, being sold to OEM customers and also used in house to build products for the DataCenter and Client businesses.

At its heart WDC is a disk and flash media company. On the flash side its competitors are Micron-Intel, Samsung and SK Hynix. Only Micron of this group sells a storage array, SolidScale, using OEM'd Excelero software. WDC is more vertically integrated upwards than any of its flash chip-producing competitors.

On the flash drive side there are a number of SSD suppliers using merchant chips, such as Seagate. It is competing with vertically integrated SSD producers, like Micron-Intel, Samsung, Toshiba and WDC but, so far, says it sees no need for a closer relationship with a chip producer.

In disk drives WDC competes mainly with the smaller Seagate and Toshiba. There appears to be no threat to WDC here, unless it stumbles in bringing out the upcoming HAMR technology drives.

In storage array systems WDC competes with many of its disk and flash drive OEM customers. They are listed here. Seagate is in a similar but weaker position with its DotHill-based array business.

It was in a stronger position but has offloaded its ClusterStor array business to Cray.

Seagate also had its EVault data protection business which was, like WDC's DataCentre Systems and Client Solutions units, a captive market for its own drives. But it sold that off to Carbonite in December 2015, for just $14m, having bought it for $185m in 2006.

The lesson Seagate learnt is that running a storage systems-level operation is very different from running an enterprise storage media manufacturing operation.

Is this the same costly lesson that WDC will have to learn?

WDC, Seagate and Toshiba also compete in the consumer storage drive business, where vertical integration with a disk manufacturing base is seen as a natural fit.

As WDC sells more flash-based consumer drives then it will push the same idea, while Seagate, with no in-house foundry, will not. We might expect WDC's costs, as a result, to be lower than Seagate's.

Where WDC is setting out alone is in offering personal cloud storage based on its own data centres. This will require a whole new skill set; building, deploying and operating potentially massive scale data centres with extremely high reliability, and making money while doing so.

This is part of the reason why Seagate exited the EVault business. It needed too much money to build up to a scale where it could compete successfully.

Barbara Nelson has no such experience and we would expect WDC to either hire people with the requisite smarts or else make a further acquisition of a company already successfully running such an operation. May we nominate BackBlaze?

El Reg would suggest that, unless WDC gets itself a serious set of massive scale database building and operating smarts, then its Cloud Services business will fail to grow to its full potential and risks being a rerun of the EVault experience.

If WDC sees itself as a storage company then it could stop buying other businesses and expanding into new areas right now.

But if it sees itself as a storage systems company then the lure of data management software is out there, and that is a fast-developing minefield. Best let it mature before entering that market.

It will be fascinating and instructive to see how Tegile fares under WDC ownership; the next few Gartner storage array magic quadrants and IDC storage trackers are going to be pored over by industry marketeers to find out.

Our thinking is that Milligan is not done yet. We think WDC is still in an expansion phase and the boss wants all the main product-producing parts of it to be aggressive market competitors. Helium-filled HAMR disk drives could come out of WDC faster than Seagate. ®