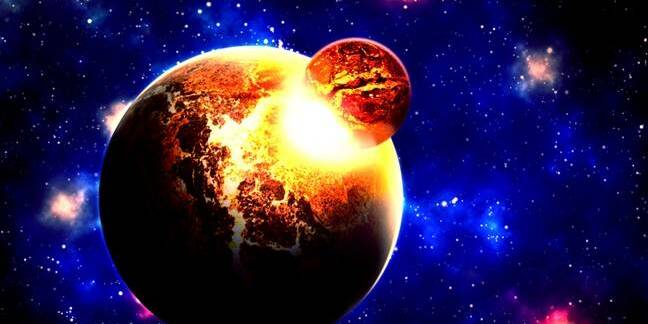 Four of the 27 moons orbiting Uranus are on a collision course and will smash into each other, creating new rings around the distant ice giant.

The prediction [PDF], published by researchers at the University of Idaho and Wellesley College, came from a study into the unusual behavior of one of Uranus' smallest moons Cressida. They looked at data from 1977 – when the rings of Uranus were first discovered – up until 2002, and found Cressida's mass is pulling some of the rings into an almost triangular shape.

This gravitational effect allowed the researchers to make an estimate of the moon's mass and take a guess at its structure, as well as projecting its future orbit. Sadly for Cressida, that orbit looks distinctly dangerous.

"Desdemona could collide with either Cressida or Juliet within the next 4 to 100 million years, depending on the masses of the satellites involved," they conclude.

The problem is that Uranus has too many moons, and it appears that collisions are not unusual. The researchers posit that the faint rings that surround Uranus are the product of similar natural satellite crashes and say it's possible two other moons, Cupid and Belinda, will also collide and fragment.

It's a bit of a tragedy, which is apt considering the naming practices of Uranian moons. Almost of its satellites are named after Shakespearean characters, a practice begun by the planet's discoverer Sir William Herschel, with a few characters from Pope's The Rape of the Lock.

Anyway, in a few million years there will be fewer moons to choose from, according to this research. We won't know the exact orbits until we actually get an orbiter around the planet, and that won't be possible for at least another decade or so, even if funding were available. ®

Cluster of rock and ice a sweltering 77K, we're told

Astroboffins discover the stink of eggy farts wafting from Uranus

Space, the rhinal frontier. These are the voyages of the Starship Trivialize...

Hate to break it to you, but billions of people can see Uranus tonight

Some may even glimpse the ring