Boffins: 68 exoplanets in prime locations to SPY on humanity on Earth

Could any 'detect the transits of the Solar System planets'?

Scientists on Earth have found thousands of exoplanets – but which of those potential alien civilizations are in the best position to discover us?

It’s a question that a team of physicists from Queen’s University Belfast, Northern Ireland, and the Max Planck Institute for Solar System Research, Germany have been grappling with.

“The detection of thousands of extrasolar planets by the transit method naturally raises the question of whether potential extrasolar observers could detect the transits of the Solar System planets,” they wrote in a paper published last month in the Monthly Notices of the Royal Astronomical Society.

Most of the exoplanets discovered so far have been detected using the transit technique. It involves keeping an eye on a star’s brightness. As an exoplanet passes directly between the star and the Earth in its orbit, the star’s observed light level dips periodically.

Robert Wells, lead author of the paper and a PhD student at Queen’s University Belfast, said on Friday: "Larger planets would naturally block out more light as they pass in front of their star. However the more important factor is actually how close the planet is to its parent star – since the terrestrial planets are much closer to the Sun than the gas giants, they'll be more likely to be seen in transit."

The transit method only works if a planet is aligned in a way that it crosses the star. In the Solar System, the terrestrial planets – Mercury, Mars, Earth and Venus – are more likely to be spotted in this way than the gas and ice giants – Jupiter, Saturn, Uranus and Neptune. Up to three planets in various combinations can be seen at any one time, the researchers found.

The next step is to find which boundaries are located in the best positions to observe more than one of the terrestrial planets crossing the Sun, and count up the number of exoplanets inside these “transit zones.” 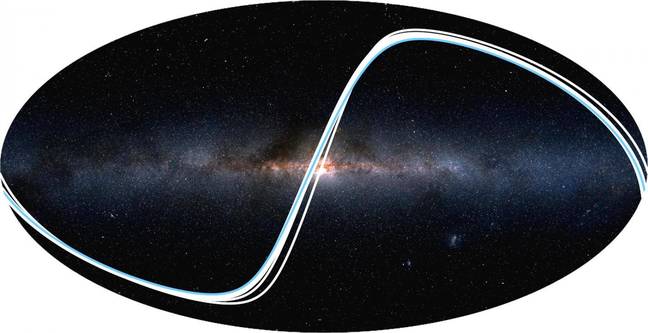 The picture shows where transits of planets in the Solar System can be observed. Each line represents where one of the planets could be seen to transit, with the blue line representing Earth; an observer located here could detect us (Image credit: 2MASS / A Mellinger / R Wells)

Katja Poppenhaeger, co‑author of the study and assistant professor at Queen’s University Belfast, estimated that “a randomly positioned observer would have roughly a 1 in 40 chance of observing at least one planet. The probability of detecting at least two planets would be about ten times lower, and to detect three would be a further ten times smaller than this."

A full sweep shows there are currently 68 known exoplanets that are in a good spot to catch a planet transiting the Sun. From this list, nine of them are temperate and have sizes similar to Earth, but none are considered to be habitable.

That doesn’t mean the chances of aliens potentially spying on Earth are completely zero. The researchers estimate that there are ten other unconfirmed exoplanets that have more favorable conditions of sustaining life, and are within the transit zones.