Stuff the movement of celestial spheres, let's sit down and watch Bonnie Tyler on TV

If someone filmed it, it must be real

Something for the Weekend, Sir? I'm on deadline for two concurrent articles and another client has asked me to rebuild their app with a new welcome screen by tomorrow morning, which is also when I shall be training a classroom of delegates how to use spectrophotometers to create custom-calibrated ICC profiles.

So much to do, so little time to prepare. Which job should I prioritise? There is only one answer.

I sit down and watch TV instead.

TV is useful in these situations because I can't do very much else while watching it. Sure, there are some basic semi-automatic actions that can be accomplished in front of the idiot box, such as eating, ironing and onanism – although I have learnt through harsh experience that doing all three simultaneously can be precarious. Otherwise, it demands too much of my sight and hearing to allow much else to function, least of all the power of independent thought.

It's the visual medium that dominates. I can move about and do other stuff while listening to the radio but TV requires my head to be located within a narrow field in the room and facing one specific direction.

This is what makes TV such an excellent time-waster. It's fantastically unproductive.

It wasn't always so easy. Back in my schooldays, when walking out of a particularly boring History lesson in order to watch an episode of Bod or Mr Benn was out of the question, I would switch off my brain by doodling on the back covers of my exercise books.

Not that anyone needs to bother these days. Just to prove that technology invades every niche of our private lives in its unquenchable thirst to destroy humanity in all its creatively expressed forms, I note that it is now possible to download a free set of pre-designed "handmade doodle" paintbrushes for Photoshop. 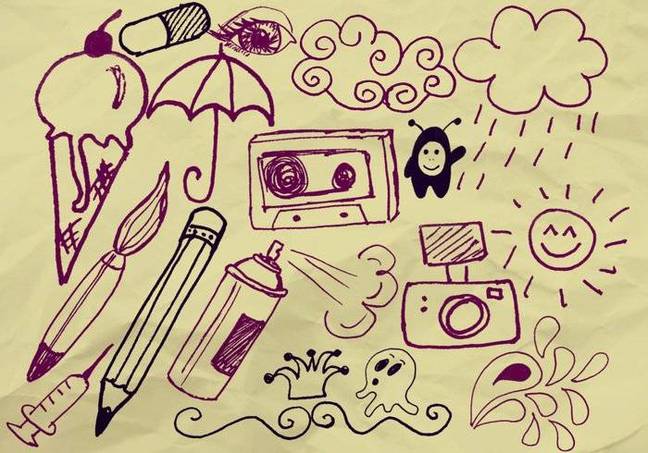 Anyone who was a schoolboy in the 1970s can see from the sample above that the brushes are woefully incomplete. Where are the crashing cars and aeroplanes, for example? The bloody gun battles and limb-hacking sword fights? The swastikas and spunking willies?

Still, my point is that visual media commands our full attention, even when – or especially when – the visuals themselves are quite unnecessary. That's what makes their appeal so fascinating. There are millions of people who choose to watch a still image of an album cover on YouTube rather than hunt for the same piece of music online as an audio-only feed.

Don't scoff: it's simply the modern-day equivalent of those of us 20 years ago who used to happily spend 45 minutes watching an almost wholly inaccurate chart of animated coloured square blocks re-arrange themselves in painful slow motion during a defrag.

Indeed, I am led to believe that just a couple of weeks ago, lots of people sat down in their living rooms to watch Bonnie Tyler sing Total Eclipse of the Heart on a cruise ship during the recent total solar eclipse rather than watch the eclipse itself.

On that note, I look forward to a raft of similarly themed events to be accompanied by music in future. A fly-on-the-wall documentary in a hospital cardiac award could be filmed to a soundtrack of Queen's Sheer Heart Attack. While they're at it, perhaps Cypress Hill could be persuaded to entertain the dementia patients by belting out Insane in the Brain.

The most disappointing aspect of Bonnie Tyler's live TV performance was the neat predictability of the ecliptic backdrop. It's not as if the sun and moon would fluff their lines at the last moment, is it? Or that Bonnie herself would forget the lyrics of the only song anyone can remember she ever sang?

Ah, back in my willy-doodling days, there was more spontaneity to live TV. No doubt you have your own favourite blooper but I'd like to share with you the following less-well-known example from the bloody awful world of 1970s French daytime television.

As well as a shocking selection of appalling haircuts and ghastly clothes, it features an inexplicably successful French pop singer called Ringo Willy Cat (not his real name, apparently) trying to mime over his latest hit on live TV while fending off a skinny anarchist who's stumbled in front of the camera to wave a protest banner and smoke a Gauloise.

Don't worry, you need only watch the first 45 seconds. The rest is just Ringo Willy Cat singing the rest of his song, which is utter fucking torture to be honest.

For your information, the banner reads "Television = idiot box" and, in a beautiful example of inverse synchronicity, Ringo throws the protester violently to the ground at the precise moment he is crooning the lyrics: "I won't fight…" Now that's the magic of live TV.

Of course, live TV means something a bit different now. This is especially the case since the property security industry got together with drone manufacturers, producing the ultimate in bastard offspring: CCTV drones.

Jonathan Radcliffe of cctv.co.uk hails this dystopian nightmare fused into reality as "an excellent security guard for neighbourhoods, where they can keep an eye on things and can follow anyone acting suspiciously". Indeed, next time you hold a barbecue, he says, "drones can check out any guests before they get to your door, asking them a few questions to work out whether they're friendly".

Yeah sure, now you're laughing but admit it: I bet your initial reaction on learning about CCTV drones was "Oh what a clever idea!" Just wait until they follow you while you suspiciously try to re-arrange your nuts while you thought no-one was looking, later to release the full fumble in 4D complete with director's cut, three commentaries and a Making Of.

Even the waste management industry is trying to get in on the act by promoting the use of body cams for rubbish collectors – by which I don't mean the stars of Hoarding: Buried Alive but good old bin men.

According to agency Business Waste, body cams could pre-empt cynical attempts by the public to deny they have over-filled their bins or mixed up their recycling waste. No doubt they can also help defend workers from random abuse inflicted by these same members of the public who, as you know, invariably act utterly mental as soon as they realise they're on camera.

What I'd like to see is a mash-up of refuse collection body cam action complete with multiple flying CCTV angles as bin men attempt to lecture the 70-year-old Ringo Willy Cat on why glossy inkjet sheets mustn't go into the paper recycling container, just as his 60-year-old anarchist nemesis storms onto his front drive in order to post a series of subversive Tweets.

Anyway, I can't wait to watch the full series when it gets on TV. It will be guaranteed to grab my full attention.

Besides, I have nothing better to do at the moment.

Alistair Dabbs is a freelance technology tart, juggling tech journalism, training and digital publishing. He apologises to his customers if he is running a little behind schedule today. Something unexpected came up. The dog ate his exercise book. Look, whatever, just let me get back to my box set.
Corrections Send us news
61 Comments

Something for the Weekend, Sir? Don't worry your pretty little head about it or I'll shoot it off

Something for the Weekend, Sir? A ghost-ship story for Christmas

This product is terrible. Can you deliver it in 20 years’ time when it becomes popular?

Something for the Weekend, Sir? How to always be on the wrong side of tech fashion

Shopping online for Xmas? AI chatbots know whether you want to be naughty or nice

Something for the Weekend, Sir? 'What are you buying, Dave? We should talk about this'

Something for the Weekend, Sir? The system's playing up again. Infamy! Infamy!

Running joke: That fitness gadget? It's, er, run out

Something for the Weekend, Sir? I'd plug it back in but the cable's not long enough for a jog

What can the 1944 OSS manual teach us before we all return to sabotage the office?

Something for the Weekend, Sir? Tell you what, let’s have a meeting about it