“It’s all about how to make the car safer and safer,” German engineering firm Bosch told The Register last week as it exhibited its driverless technologies in London.

Bosch, best known in the UK for domestic power tools and white goods, has been working on self-driving car technology for a few years now. While nothing that it exhibited in London’s Somerset House was new as such, the company’s plans for the future are ambitious – and, inevitably, linked with advances in artificial intelligence technology.

Stephan Stass, Bosch’s senior veep for its driver assistance unit, told us: “Artificial intelligence is absolutely mandatory to go to the next level, level 4 or level 5. It’s not all about see[ing] the current scenery, you have to make an interpretation... ‘What am I going to do?’ in order to maybe reduce the speed.”

So far Bosch has a level 3 vehicle, a converted Tesla with a load of extra sensors fitted and a computer to make sense of all the data buried in the boot. 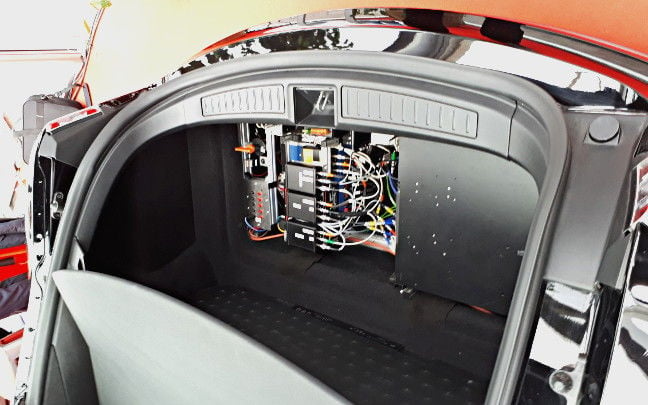 The sensor fusion gear in the boot of Bosch's Tesla testbed car. Picture taken looking down from above 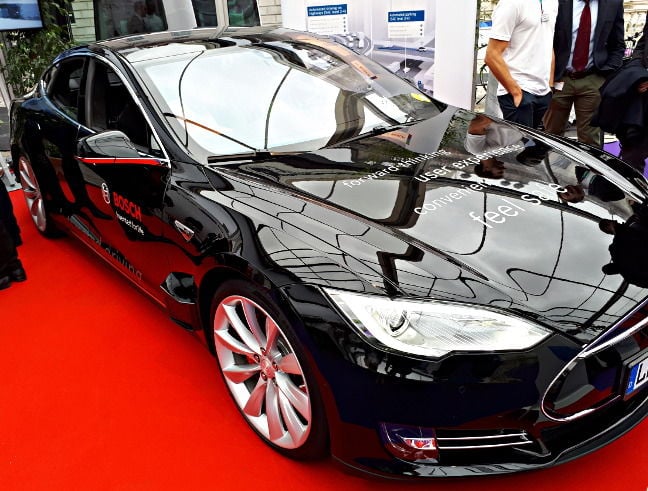 “The basic system has to be safe in all cases,” said Stass. “It’s not replacing all current systems with artificial intelligence, but adding on AI to current systems.”

Bosch’s offering is based around driver assistance aids, including lane-keeping and parking assist, where the car parks itself following a pre-programmed route recorded by the driver. 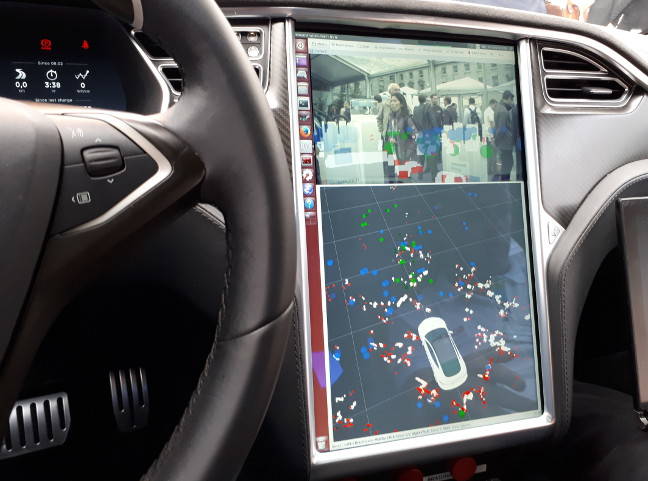 We were told that this system requires the car to be positioned within about two metres of the recorded start point, with onboard systems figuring out the car’s precise position and driving it in from there. This is not new technology – parking assist systems have been on the market for years – but Bosch is developing features where the system can offset its stopping point by up to half a metre to take into account things like clutter stowed down the side of a garage. The downside is you need a competent driver to perform the required manoeuvre manually in order for the car to record it.

In addition, the self-parking function can be activated from a smartphone app (a bit like the BMW in James Bond film Tomorrow Never Dies) and incorporates a dead man's handle function, whereby the user must keep a finger pressed to the screen. If he takes his finger off, the car immediately stops.

The testbed Tesla also includes a driver vigilance monitoring system, which works as part of Bosch’s level 3 autonomous system. Bosch’s Michael Mayer explained that this watches the driver’s face and triggers increasing levels of alarms if he starts nodding off or gazing into space instead of watching the road. 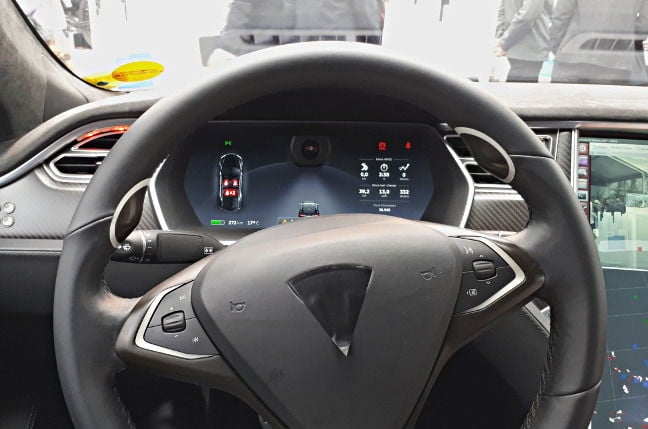 The steering wheel of Bosch's Tesla testbed. Note the driver-monitoring camera in the centre of the dash

The two buttons at 10 o’clock and 2 o’clock on the wheel are the buttons for taking control of the car and handing it off to the self-driving system.

Talking about the data gathered by connected cars, and responding to our questions about the data protection implications of this, Bosch’s Stass said: “We at Bosch, we like to distinguish ourselves a bit from this ‘collecting data from each and everybody and everything’ … this is not what we want. We want to have clear transparency.”

“The driver is informed about which data [we collect] and what do we do with the data, and he has always the possibility to say no,” continued Stass. “This is a strong policy, we think trust in handling of this data is a value by itself. If we as Bosch destroy this kind of trust then immediately we would have a problem in collecting the data which are mandatory.”

Stass – not a native English speaker – explained: “It’s mandatory that we make a very trustful relationship with the end consumers in order to make it happen that this kind of data can be collected.”

He referred to mapping data providers, advocating a “crowdsourced approach” to the gathering of mapping data from current and future cars’ onboard sensors and turning those into distributed hi-fidelity environmental maps. And as for security, Stass said this is “a big challenge”, highlighting how Bosch “separate[s] strictly in the car, from the architectural point of view, the infotainment side from driving systems where you can influence brakes and steering.”

Hackers have broken into connected car systems in the past and will doubtless continue doing so in the future. Bosch is certainly making the right noises about securing its software and being responsible with the data it collects, and further advances by the German company into the connected car market will be of great interest. ®