Lasers are too pricy, so we're using BLINKENLIGHTS instead

As low-cost satellites become more common, researchers are turning their attention to improving their communications capabilities without adding crushing costs.

A laser might, as NASA demonstrated earlier this year, be able to hit a gigabit per second – but the kit's expensive.

So a pair of researchers from Florida-based Aphelion Orbitals have instead achieved better than 8 Mbps – using boring old LEDs.

Interestingly, one of their cost-saving measures is to reduce the accuracy you need to aim a signal at the satellite, by using a large photon-collection surface that's already common in space, the satellites' photovoltaic (PV) panels, as the receiver.

This also removes a separate uplink antenna, which helps make birds in the Cubesat class smaller, lighter, and cheaper.

In this paper published at arXiv and accepted by the American Institute of Aeronautics and Astronautics, Sihao Huang and Haowen Lin worked to overcome the features of the PV panels that make them poor communicators: their parasitic capacitance, drift and diffusion.

Fairly simple analogue electronics can, however, overcome these problems: a handful of coils, resistors and capacitors applies a reverse bias to the photodiodes that improves their bandwidth as a communications receiver, and only adds a little to the weight of a cubesat. 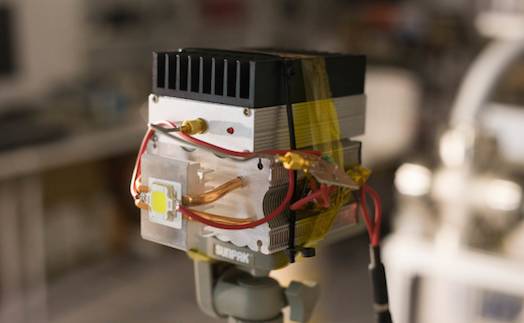 The visible light transmitter proposed for Calypso, with amplifier and bias electronics

The satellite-to-earth downlink is easier, since it's far less expensive to have a decent-sized receiver at the ground station, and the Aphelion Orbitals design uses a simple QAM-16 modulation scheme to make it easier to correct atmospheric distortion in the signal.

Having consumed a couple of Raspberry Pis and associated electronics to build their ground-based demo, what Huang and Lin want next is to put together a Cubesat demo they've dubbed Calypso, to give the system a live test in space. ®