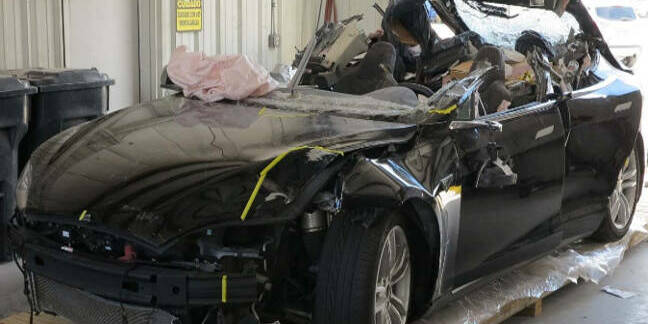 America's National Transport Safety Bureau (NTSB) has decided that late Tesla-driver Joshua Brown was responsible for the crash he died in, but that Tesla's Autopilot contributed by (at the time) allowing him to ignore the road for too long.

As we reported in June, Brown's hands-off approach to driving was the big factor in his demise, but it didn't help that Autopilot missed a truck turning in front of his car.

The NTSB has now expanded on its findings, blaming the accident on a combination of “driver errors, over-reliance on automation” and a “lack of safeguards”.

Brown wasn't the only driver at fault, the NTSB says: the driver of the truck he collided with failed to yield right of way to Brown.

Autopilot's contribution was that at the time of the crash it let drivers pay too little attention to what's going on. As the NTSB statement explains, “The operational design of the Tesla’s vehicle automation permitted the car driver’s overreliance on the automation, noting its design allowed prolonged disengagement from the driving task and enabled the driver to use it in ways inconsistent with manufacturer guidance and warnings.”

In September last year, Tesla updated the Autopilot software to incorporate radar data into its collision detection, and drivers now get more reminders from the system if they take their hands off the wheel for too long.

The NTSB says it's made seven recommendations in response to its investigation. Two of these relate to “Level 2 vehicle automation systems”, and apply equally to Tesla, Audi, BMW, Infiniti, Mercedes-Benz and Volvo.

That recommendation is reiterated for vehicle manufacturers in America and worldwide.

The bureau says automation systems need safeguards so they're only used in the “conditions for which they were designed”. It also feels that systems need to better monitor drivers' engagement and send alerts when they're not paying attention.

Other recommendations include defining and standardising the data that automation systems collect, to help analyse what's happened in a crash; verify that systems can't be used outside their design parameters; benchmark the data collection on new vehicles; and define a standard format for reporting automated vehicles' control data.

In a statement sent to Reuters, Tesla reiterated its earlier statement that Autopilot cuts the accident rate in Tesla cars by 40 per cent.

While still evaluating the NTSB report, the electric car-maker added that “We will also continue to be extremely clear with current and potential customers that Autopilot is not a fully self-driving technology and drivers need to remain attentive at all times”. ®

You guessed it, he was using not-an-Autopilot