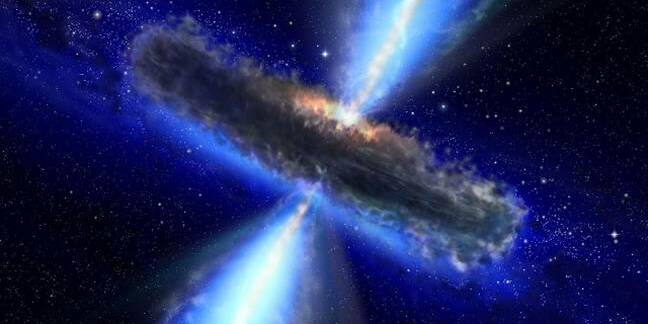 Physicists have managed to analyze the hidden "tails" swirling around quasars in supermassive black holes by using a combination of radio telescopes and the Gaia space observatory.

A quasar is an active black hole, identified by plumes of matter shooting out from its center, and a shroud of gas and dust known as an accretion disk. When matter from the accretion disk is swallowed by the quasar, it heats up and releases energy across the range of the electromagnetic spectrum, shooting out hot jets of matter.

Observing a quasar at various wavelengths of light allows scientists to piece together its different properties.

A paper published in the Monthly Notices of the Royal Astronomical Society shows how the inconsistencies actually provide researchers with a unique window to discover the accretion disk and the jets of material that look like "tails" around quasars.

Leonid Petrov, co-author of the paper and a researcher at the Russian Academy of Sciences said: "There are things you can't see in the radio [wavelengths]. Thus, for instance, an accretion disk around a supermassive black hole emits mostly visible and ultraviolet light. So we decided to combine the data from two sources."

Gaia measures the total power emitted from the long jets of material emitted from quasars, and the radio telescopes look at the angular resolution. Both give information about the position of the quasar's location, but for six per cent of the objects, the coordinates from both instruments were not in agreement.

The researchers found that the quasars veered off in the same direction as the jets.

"By comparing the data from radio interferometers and optical telescopes, we can obtain information about hot jets and the accretion disks surrounding black holes at the center of galaxies in the visible part of the spectrum. We have now gained a better understanding of what their structure is and what processes occur inside them," said Yuri Kovalev, first author of the paper and a researcher at the Moscow Institute of Physics and Technology.

The shift in data has given scientists a new way to recreate and study the structure of faraway quasars at high precision. "This precision is superior to what is possible with ordinary optical telescopes and even with Hubble," said Kovalev.

The researchers hope that this will help reveal the exact mechanisms powering the radio jets, so that the true nature of active supermassive black holes can be understood. ®