Scientists have found evidence that there may be ground ice on Vesta, the brightest asteroid visible from Earth.

It’s not the first time that ice has been detected on space rocks, and it adds credibility to the idea that asteroids may have brought water to Earth’s oceans. As asteroids crashed into Earth, the impact would have melted the icy deposits, leaving large pools of water.

A paper published in Nature Communications describes how radar data from NASA’s Dawn spacecraft reveals that a variation in signal reflectivity shows Vesta’s surface is rough and pock-marked. But unlike the Moon, the patterns cannot be fully explained by craters and are instead signs of ice.

Dawn uses a technique known as “bistatic radar.” Beams of radio waves are sent down to Vesta, and the signals are reflected back and decoded by scientists working at NASA’s Jet Propulsion Laboratory. 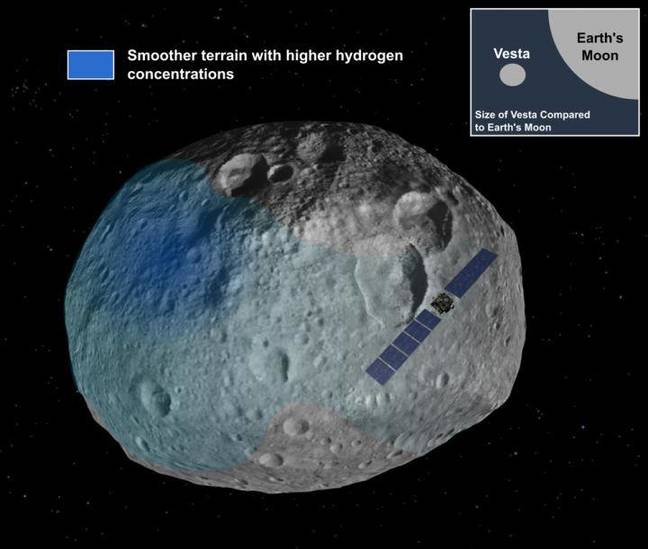 Essam Heggy, co-author of the paper and a researcher at the University of Southern California, described the radar signal as “seeing a flame from a lighter in the middle of day from the opposite side of the United States.”

It “suggests that potential ground-ice presence may have contributed to the formation of Vesta’s current surface texture,” according to the paper.

Vesta is the second-largest asteroid floating in the Solar System’s asteroid belt, between Mars and Jupiter. It has a mean diameter of 525 kilometres (326 miles). Together with Ceres – a dwarf planet with a diameter of 945 kilometers (587 miles) – both rocks are ideal targets to study the Solar System’s origins, because they are leftover remnants that did not get swept up by the rocky planets billions of years ago.

It is believed that the sheer size of Vesta means it could have a core and mantle, just like Earth.

Heggy told The Register that the team hopes to perform similar measurements on Ceres to “compare the surface roughness properties of the two asteroids and how they correlate with subsurface hydrogen concentration.”

“We hope to understand ice enrichment on asteroids and how that ice shaped the surface of this unique body. Also, how many other asteroids could potentially bear ice, to what extent, and, if so, what role did asteroids play in water transport across the solar system?” ®