Unloved Microsoft Edge is much improved – but will anyone use it?

We saw what you did there, Windows 10 web browser bods

Microsoft held its Edge Web Summit on 13 September, announcing that the web browser now has “330 million active devices”, just over two years since its launch with Windows 10 in July 2015. The stat was explained as devices where someone actively uses Edge during the course of a month.

The figure disguises what in reality is a tiny market share for Microsoft’s browser. Statcounter gives Edge just a 3.5 per cent share of desktop browsing, behind IE at 9.6 per cent, Safari at 5.1 per cent, Firefox at 14.6 per cent and Chrome at 63 per cent. Windows 10 is around 28 per cent of the desktop market, so even on Windows 10 only a small minority use Edge. 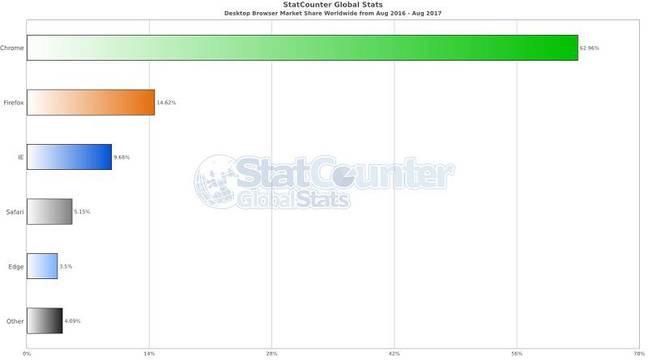 What is wrong with Edge, and why does Microsoft persevere?

Microsoft announced the Edge web browser in April 2015, as part of the build-up to the release of Windows 10 in July of that year. The name was new, but the technology was already known, under the code name Project Spartan, “built for the next generation of the web … a browser with a modern architecture and service model for Windows as a service”.

Edge was equally notable for what it omitted as for what it added. Features not supported include ActiveX components, Browser Helper Objects, Active Documents, Visual Basic Script, Java and Silverlight. In fact, Edge launched without support for any kind of plug-in, putting it at an immediate disadvantage to competitors such as Google Chrome, Mozilla Firefox, and even Internet Explorer (IE) 11, which is also included in Windows 10 for compatibility reasons.

The one concession to legacy code in Edge was support for Adobe Flash, though this is in the process of being phased out and will be gone completely by the end of 2020, according to current plans.

Microsoft had several goals with Edge. One was to achieve a clean break from IE. The company’s mantra used to be “don’t break the web”, as a result of which IE has a complex set of compatibility modes, such as IE9 Standards mode, EmulateIE7 mode, IE5 “quirks” mode and more. The problem is not so much rendering websites that nobody has bothered to update, but more to do with applications, many of them built with Microsoft’s own tools, which rely on features of IE.

Such applications can continue performing useful business functions for years after the tools which created them have been abandoned. With the release of Edge, Microsoft no longer worries about IE compatibility; if you need it, just continue to use it.

Edge enabled Microsoft to overcome the problem where web developers serve inferior versions of their sites if IE is detected, rather than trying to get the best that can be achieved with a specific version.

The company also wanted to catch up with HTML5 standards. Edge has a new rendering engine, called EdgeHTML, which started as a fork of the Trident engine in IE, with large amounts of legacy code removed. EdgeHTML 12 was the first release (presumably counting up from IE 11), and already well ahead of its predecessor in standards support. EdgeHTML 15 is the current version, and coming in the Windows 10 Fall Creators Update in October 2017 is EdgeHTML 16. It is not quite the equal of Chrome in standards support, but comes close, neck and neck with Firefox, and ahead of Apple’s Safari.

Microsoft does its utmost to push users towards Edge in Windows 10, via setup defaults and integration with Cortana and the Start menu.

Why do only a minority of users persevere with Edge? One factor was that the first release of Edge was almost unusable. The rendering engine was good, but the surrounding application was poor. Frustrations included no extensions, limited tab management, no choice about where to download files, and crude "Favorites" management. More seriously, some websites did not work properly, despite the company’s efforts. Users who liked or needed IE tended to revert to using IE as much as they could, while those on Chrome or other browsers had little reason to switch.

Another factor is that Google exploits its search dominance to promote its browser. Every time you visit Google with Edge, you see an ad for Chrome.

Microsoft is on the back foot with Edge, despite doing the right thing with web standards. It's unfortunate. Yet Edge remains strategic to the company. Further, it is now a decent browser and worth a second look.

Next page: Why Edge still matters to Microsoft
Page: