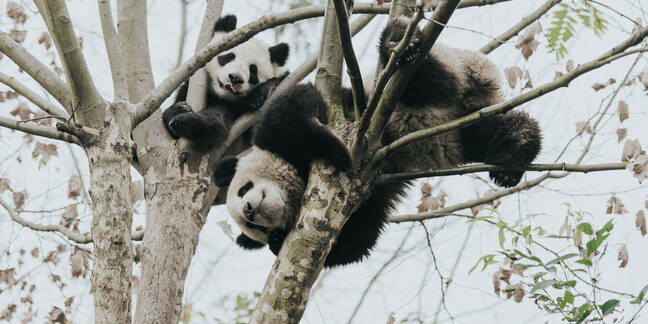 Not content to bait developers by declaring that Python is the fastest-growing major programming language, coding community site Stack Overflow has revealed the reason for its metastasis.

Coming a day after Programmer Day, which falls on the 256th day of the year – except January 7: – the explanatory post by data scientist David Robinson could be flagged as an off-by-one error.

But his case for the rise and rise of Python is no less plausible for its tardiness. Programmers love pandas.

Not the black-and-white bamboo eaters, but the Python data science library. "Pandas is by a large margin the tag most visited by Python developers, which isn't surprising after we saw its earlier growth," Robinson explained.

Love of pandas reflects a generalized ardor for data science, as measured by visits to specific topics or tags on Stack Overflow. "Python's popularity in data science and machine learning is probably the main driver of its fast growth," said Robinson.

And fittingly, academia represents the greatest source of Stack Overflow's Python-related traffic, though interest is also growing in the government sector and is popular in the electronics and manufacturing industries.

In a phone interview with The Register, Robinson added the financial industry to the list. "Finance is one of the highest rates of visits to pandas," he said.

Robinson dismissed the proposition that visits to pandas tagged posts could be attributed to the inscrutability of the library. "Most of our research suggests that views correlate with use rather than problems with the technology," he said. "I'm skeptical of the narrative that there are particular technologies that are so confusing people visit them more often."

Python still has some rough spots. Package management and distribution could be easier. And while there are ways to make Python fast, Python critics will suggest that the code in question would be faster still if written in C, C++, Go, or some other systems-oriented programming language.

Such claims can't easily be generalized, but they may be right, where execution speed is the primary metric of worth. Python isn't the right tool for every job, but for many it's a very good one.

Robinson said he expects the growth in Python queries at Stack Overflow will level off in time, that being the norm. "We've seen that pattern with other major technologies," he said. "But Python is still growing rapidly." ®

Python 2 bows out after epic transition. And there was much applause because you've all moved to version 3, right? Uh, right?

Version 2.7.18 is the last official Python 2 release, but it'll live on

Snakes on a wane: Python 2 development is finally frozen in time, version 3 slithers on

I'm not quite dead, mutters 2.7 as rigor mortis sets in

No word on eggman counterpart

Look, we caught up with AWS