'All-screen display'? But surely every display is all-screen... or is a screen not a display?

Sounds like a good idea but looks can be deceptive

Something for the Weekend, Sir? Right. Right. Right. No, left. I said LEFT! Oh for the love of humanity, swipe left now! My eyes! Sorry, no, I mean "My EARS!"

Is this what it's like to browse a dating site by voice command? I only ask because I hear that dating apps have been introducing Alexa skills and I am trying to work out why.

Let's say you're pottering about the house whereupon you're suddenly overwhelmed by a desire to find a new life partner. Rather than firing up a web browser or, oh I dunno, going outside to meet people and actually living your fucking life, you stay put in your sad little home and shout across the room:

"Alexa, ask eharmony about my matches!"

Five minutes later, once you have persuaded Alexa to stop reading aloud Wikipedia's 8,000-word entry on the History of Kitchen Matches and called the fire services to insist they stand down because you are not in any immediate danger, Alexa starts commenting on your inbox of prospective gals / fellas / quadrupedal ruminants.

"Let me tell you about your first match," it announces. "Ooh la la! She lives five miles away!"

Hmm. Personality, looks, intelligence… all these things are secondary to good old proximity, yes? Blimey you must be desperate. Still, you can get round there on the bus within the hour and maybe even impress her with the hologram on your Freedom Pass.

"Oh and there is X. What a catch! He seems great."

Seems great? You want me to trust a single-minded cylindrical audio bot that utters goofy inanities such as "ooh la la" and is regularly tricked by your seven-year-old niece in Australia into purchasing multiple 12-packs of toilet roll merely by her randomly shouting out the order during your weekly family Skype chats?

The next step, I guess, is for your potential date to record a voice message for Alexa to play back for your aural entertainment.

It might seem jolly worthy to judge a prospective partner purely by the beauty of his or her vocal chords but I fear that not eyeing up their mugshots might put you at a disadvantage. What is this, the ultimate blind date?

For all you know, your inbox could be filled with syrupy-voiced actors who all happen to be auditioning for The Hunchback of Notre Dame or entering a Martin Clunes lookalike contest.

Jeez, it could even be Donatella Versace herself. LEFT!!!

Obviously, I have misunderstood how this is supposed to work and I've taken it all too literally. It's an ongoing problem with me: I make the ridiculously reductive assumption that people mean what they say.

For example, Apple insists that I have been "stunned" by the "all-screen display" on its iPhone X.

Hang on, "stunned"? To stun (verb) generally has three meanings:
(1) To daze or render senseless, by or as if by a blow.
(2) To overwhelm or daze with a loud noise.
(3) To stupefy, as with the emotional impact of an experience; astound.

As for "all-screen display", oh come on. Here's a detail: 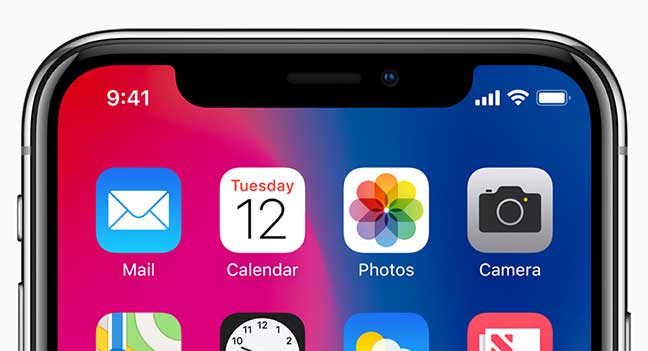 Very nice, I'm sure, but it's not all-screen, is it? I mean, the bits highlighted below clearly aren't screen, are they? 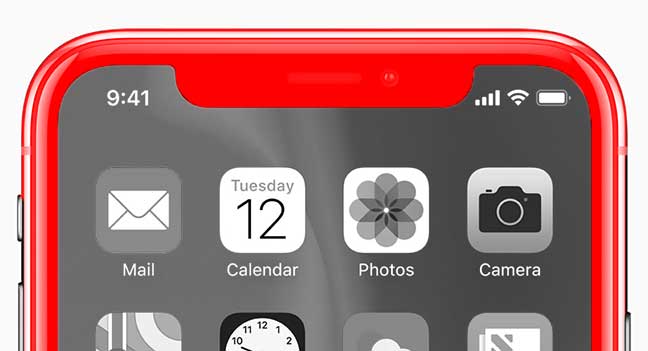 Am I really being so reductive? Is it just that Apple is saying that its display is a screen and its screen is a display, and that they occupy the same space as each other because they're the same thing?

That would be like saying the iPhone X has an "all-display display" or that my right shoe is currently filled with an "all-foot foot".

Yet more misunderstanding was rife down at the gym this week, where I was trying to help a stressed-out member of staff behind the front desk with an impossible query.

Two gentleman had walked in to ask whether they could sign up with a discounted Family Membership plan because they were brothers. The answer is no: Family Membership, as perhaps you have already worked out, is intended for parents and children.

This is reminiscent of the early days of Irish budget airline Ryanair, whose boarding sequence announcements would usually begin with "disabled passengers and those requiring assistance", followed by "parents with children". The latter would be a cue for every 7ft tall rugby player and pot-bellied grotesque to muscle their way to the front, sending pushchairs flying and toddlers sprawling, on the basis that they were travelling with their middle-aged mum.

Ryanair these days makes the point of calling "parents with infants and young children".

Back at the gym, one of the brothers asks if they could get Family Membership if their Mum joined.

Sure, just ask your Mum to sign up and come in for a health assessment. What's that, she lives in India? In that case, no.

The brothers confer and then query whether it might work if they could persuade their great-aunt, currently terminally bed-bound in Aberdeen, to join instead.

No. Anyone else you want to try among your extended family? Your half-sister's college friends? Your father-in-law's work colleagues? Your pet hamster?

And so it goes. It could easily have been sorted if the gym website took the trouble to make it clear by saying what it means in the first place.

Thus, I strongly suggest to Apple that it removes its hysterical claim that simply looking at its new mobile phone will make me a victim of physical or emotional violence. Let's leave such hyperbole to when the world comes apart, shall we?

Instead, it should more accurately assert that my reaction is likely to waver between detached interest and mild concern about how my clients' digital content will appear on its device's new wonkily shaped screen.

Alistair Dabbs is a freelance technology tart, juggling tech journalism, training and digital publishing. Since being forced by circumstance to jump ship to the Android platform for his mobile phone at the end of last year (his iPhone got nicked), he is struggling to get excited over Apple's latest devices. His GP is concerned that he might even switch his laptop to Linux before winter. Yikes.
Corrections Send us news
96 Comments