Fancy that! Craft which float over everything on a cushion of air

Geeks' Guide to Britain Did you know that the word “hovercraft” was once patented? And did you know that Great Britain is a world leader in the design and manufacture of the floaty transporters, and has been for half a century?

These and other surprising facts – including that some of the largest commercial hovercraft ever to be used in revenue service spent their lives shuttling booze cruisers back and forth across the English Channel – can be found at the Hovercraft Museum, at Lee-on-Solent in the south of England.

A century ago, what is now the site of the museum was known as HMS Daedalus and used as a Fleet Air Arm seaplane base. Back in the early days of aviation, and especially naval aviation, the station was at the forefront of naval and aviation technology alike. Seaplanes and skilled pilots were in great demand by the Royal Navy for anti-submarine patrols, and a new training base had to be set up to fill the service’s demand.

Thus came about the “temporary” Naval Seaplane Training School at Lee-on-Solent, with the new training school being based around a large local property, Westcliffe House. Slipways and hangars were duly erected, with the former leading down into the waters of the Solent itself; of the latter, one of the original J-class hangars, capable of being erected by just 15 men in three days, survives to this day.

After the First World War ended in November 1918, demobilisation meant the demand for seaplane training dropped sharply. What was now known as the RAF Seaplane School, following the amalgamation of the Royal Naval Air Service and the Army’s Royal Flying Corps into the then-new Royal Air Force in April 1918, was shuttered for two years. In 1920 the station re-opened once again for RAF seaplane training, gradually expanding as the years went by.

A hovercraft floats on a cushion of air. This cushion of air is generated by a large fan, or series of fans, and contained underneath the craft with a rubber skirt. Its great advantage over traditional land and water-borne craft is that the hovercraft exerts very little ground pressure and can cross difficult flat terrain (such as the division between sea and land) with absolute ease.

Hovercraft are normally propelled and steered by a combination of fore-and-aft facing fans and rudders to direct the airflow and steer the craft. For boarding, many hovercraft deflate the air cushion to lower the deck.

As the lean years of the 1920s and 30s came and went, the School of Naval Co-operation, as Lee-on-Solent base was then known, gradually assumed an increasingly important role in the RAF; HQ 10 Group was based there (the formation would play an important role in the defence of the western part of the UK during the Battle of Britain) and RAF Coastal Command put down its roots at Lee-on-Solent in the early 1930s. With new formation headquarters came demands for more space, including 120 acres to the north of the site for levelling into a new aerodrome. That survives to the current day as the civilian Solent Airport.

The Second World War brought dramatic change. Fighter aircraft were based at Lee-on-Solent to help stave off German air raids. A Stuka dive-bomber raid in August 1940 killed 14 people and destroyed 42 aircraft on the ground, though only three of those were the all-important fighters used for defending Britain. The D-Day Museum describes Lee-on-Solent as one of the busiest airfields on the south coast during D-Day, hosting no fewer than 10 squadrons from the RAF, Royal Canadian Air Force and US Army Air Force during the invasion of occupied France.

435 sorties were made from Lee-on-Solent during 6 June, 1944 – the largest number from any Allied airfield on the day of the invasion landings.

The rise of the hovercraft

Following the war, Lee-on-Solent became a hub for Royal Navy aviation. Within a decade the last of the seaplanes had departed, helicopters came and went and jet aircraft, in the form of Gloster Meteors, took up residence. At the end of the 1950s it briefly acquired yet another official naval name, HMS Ariel, before reverting back to the old HMS Daedalus moniker.

In 1961 the Armed Forces were looking at a new form of amphibious transport: the hovercraft.

Thanks to the large hangars and slipways, Lee-on-Solent was a natural home for an experimental hovercraft unit. Marconi engineer Dr Christopher Cockerell patented the word “hovercraft” in 1954, as a result of his experiments on how to put troops ashore on a beach quickly – and while keeping them dry, something traditional landing craft (as used during D-Day) generally did not achieve.

Cockerell’s theories came to pass with the Saunders-Roe SR.N1, the first practical hovercraft. A Pathe News reel of the SR.N1's launch:

A Pathe News reel of the SR.N1's launch 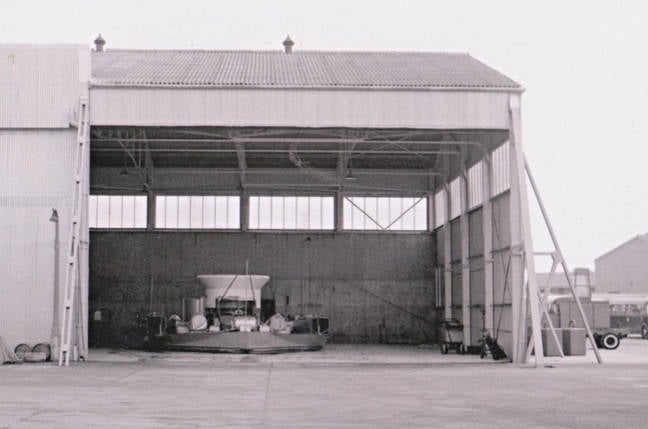 SR.N1 hovercraft, lurking at the back of a hangar. Picture courtesy of Warwick Jacobs, the Hovercraft Museum

The technology caught on rapidly, and caught the public’s imagination into the bargain. Not only were the Royal Marines equipped with hovercraft, but the floating vehicles were also entering commercial service as direct competitors with ferry services. The Joint Inter-Service Hovercraft Trials Unit was based at HMS Daedalus for many years, until its closure as part of wider planned defence cuts in 1981. Some have pointed out the Royal Marines’ job of retaking the Falkland Islands after their invasion by the Argentine military junta of General Galtieri.

Next page: Hovering around
Page: