One man has calculated the power of electric shocks emitted from electric eels on the human arm - his in fact - all in the name of science.

Kenneth Catania, a neurologist and biologist at Vanderbilt University, Nashville, Tennessee, repeatedly shoved his arm into a tank containing a small electric eel (Electrophorus electricus) to subject himself to painful zaps.

“It was definitely a good lesson in how efficient the electric eel would be at deterring a predator,” Catania observed.

A paper published in Current Biology describes the experiment’s setup. 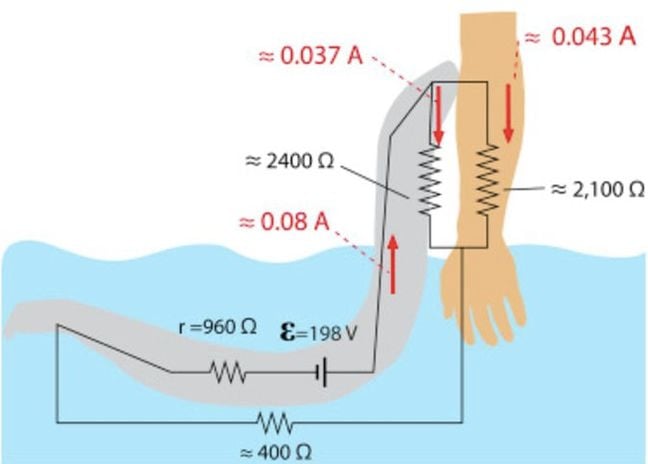 A diagram of the electric circuit with a human arm (Image credit: Kenneth Catania)

Catania first measured the electromotive force (EMF) and internal resistance to measure the energy of the battery, or electric shock. Electric wires were attached to the head and tail of the 16-inch long eel, which Catania nicknamed Finless.

The wires led to a voltmeter and ammeter and found that the EMF was 198 volts and it had an internal resistance of 960 ohms. The water’s resistance to the shock was also measured to be 400 ohms and the peak resistance of the eel was 2400 ohms.

Next, an electrical circuit containing the eel, an ammeter and Catania’s arm was set up. As Finless leapt up to attack the researcher, the ammeter gave a peak reading of 43 milliAmps. By knowing the resistance of the arm – 2100 ohms – and the amount of current through it, the power of the shock was calculated to be approximately 3.9 Watts – enough to make Catania flinch and pull away.

“The subjective report was that involuntary arm withdrawal occurred on every trial during which a circuit was made by the eel,” he wrote in the paper. The experiment was repeated ten times. Electric eels can grow to eight feet or longer, and can afflict a shock equivalent to nine tasers.

It’s not the first time Catania has fooled around with eels. Last year, he proved that eels could jump, and the voltage and current of their electric shocks increases the higher the jump. It verified an idea that began in the 1800s, where Amazonian fishermen claimed eels could leap out of the water to attack horses. ®