It's coming for your jobs, very, very slowly 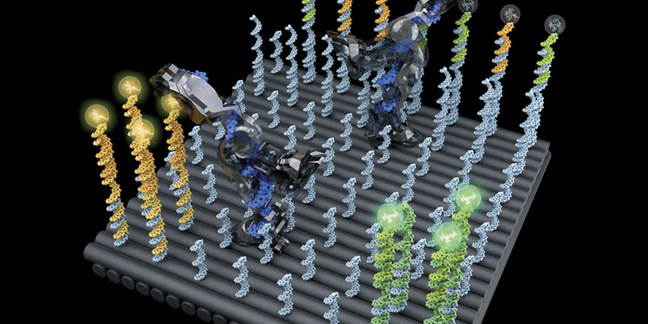 The robots are collectively performing a cargo-sorting task on a DNA origami surface. Considerable artistic licence has been taken. Illustration: Demin Liu (www.molgraphics.com)

ROTM It's the most eco-friendly DNA walker I know, computer scientist Damien Woods told The Register.

Woods, of Inria in Paris, France, was talking about a type of molecular machine which walks around and sorts biological "cargo" – all the while minimizing the energy it expends. He was part of a team led by Anupama Thubagere that designed the project, in which a robot is designed to perform a random walk without any energy supply*.

While software developers might write algorithms for sorting, human and other organisms' cells have their own biological ways for organizing the molecules inside them – such as how the proteins inside neurons are created in one spot and moved elsewhere.

This is not the first time researchers have created DNA molecules that can be biologically coded to perform as robots. One application could be to carefully build new devices from nanomaterials such as gold nanoparticles, much like machines build car parts on an assembly line.

Along that vein, researchers have shown pre-programmed DNA origami can perform tasks such as travelling in a line picking up molecular "cargo". In the previous academic work with DNA robots, though, humans have had to give intermittent instructions (such as adding molecules into a test tube to produce a response) or they couldn't see more than a couple tasks performed.

In the new work, "A cargo-sorting DNA robot", appearing in Science, Thubagere and her colleagues created a system that allows DNA molecules to autonomously meander randomly around a 2D surface of extra DNA strands, picking up yellow or pink coloured molecule "cargo" and then dropping them off into two separate sorting locations on the way.

You could, of course, walk quickly and easily if you provided fuel, Woods said, but the team wanted to minimize energy use. The walker here moves around randomly – not consuming energy.

It's about 20 nanometres tall and uses its single "leg" and two "feet" to stick and unstick itself (walk) on individual track strands of DNA, which you could think of as blades of grass. Each step takes about five minutes, and the size of that step is about six nanometres.

Sticking and unsticking itself in this way does not consume energy since the walker is not gaining or losing any of its DNA bases.

It would move around continuously unless you froze it or a piece of the system degraded, Woods said.

Occasionally, the walker should (barring defects) encounter one of two colour-coded molecules that are attracted to it biologically, a bit like velcro. The walker consumes energy as it gains the extra bases (like adding fuel).

Then, the walker continues walking around. Every now and then, it will walk into one of the yellow or pink sorting stops, and the held cargo will detach and go to the spot if it matches biologically – the cargo gains extra bases (energy consumed again here) so it won't be picked up again.

And the walker continues. The researchers found that not all the cargo was being sorted with a single walker (perhaps due to defects) so they added more, finding a closer sorting completion rate.

"It is a very beautiful demonstration," Kurt Gothelf of Aarhus University in Denmark, who was not involved in the study, told The Register. "A very advanced function is obtained" given the "simplicity of the system design".

He says that the random walking behavior gives it more flexibility than other walker systems.

Some are unsure that the extra programming is enough to make this mainstream. Although it's more complex than other attempts, it's "still REALLY slow," Thorsten Schmidt of Technical University Dresden in Germany, who was also not involved in the study, told The Register. "Scientifically it is great," he wrote, but he's "not sure if this will ever have any practical use."

Lulu Qian of California Institute of Technology, whose lab led the work, told The Register that "Not all applications require the task to be done quickly. For example, some chemical synthesis and therapeutics tasks mainly require the product to be correctly synthesized, or delivered to the correct places at the correct time."

She wrote that one way to try to make it faster may be to use "smaller" feet that don't bind as strongly to the track pegs, although checking that would require more investigation.

The researchers said that future work could involve looking at the environmental conditions of DNA robots or adding extra functionality such as a way for them to communicate with each other.

Nomura Shin-ichiro of Tohoku University in Japan, who was not involved in the study, told The Register that the system is limited because it must walk on existing rails of DNA. But he wrote that because DNA is such a common molecule, "there will be no doubt that [some day] a molecular robot will emerge, made by the same molecule that the organism is using" and would be able to complete tasks on cell surfaces according to molecular programming.

"It would be a good time" to start thinking of the ethical, legal and social implications, he told us. ®

* Just for the duration of the random walk - after this it does consume some energy, as you'll discover as you read on.