Samsung's Galaxy Note 8 is hot, but not much more than the S8+

It's stylish, but the stylus doesn't add a lot

First fondle Samsung's Galaxy Note 8 is everything you'd expect in a premium handset, but the stylus doesn't appear to add huge value.

The Register was today offered the chance to get hands-on with the new phablet at its formal Australian launch.

My immediate impression was that there's now very little distinction between a Phablet and a plus-size handset, because the device is scarcely larger than the Galaxy S8 Plus. Here's the tale of the tape.

Between those specs and the fact there's just a millimetre or two between the devices, clearly the distinction between the Galaxy S and the Note is now trivial.

Except for one thing: the Note includes a stylus and apps that let you put it to work. I gave a couple a whirl and they did a perfectly good job of rendering my handwriting, perhaps making it a little less illegible than is usually the case. Samsung reckons it's possible to dial phone numbers you hand-write in notes, but how to do so was not immediately apparent. Spokespeople also enthused about bringing the nostalgic experience of using a pencil into the digital world, but I could find no immediately obvious value-add from the stylus. Having said that, my handwriting was always terrible, is getting worse, and I am an utterly inept artist. Others may find the stylus gives them welcome options and opportunities.

The stylus also produced one of the weirdest things I've ever seen in a phone.

The device suffered no ill-effects, so I assume this was a feature not a bug. Whether intentional or accidental, it was disconcerting.

Samsung made much of the device's camera, now imbued with 10x optical zoom. Below is a test shot, which I think does a decent job of contrast on the plants in the foreground, picks up the pigeon-defeating wires on the wall quite well and handles the rest of the view quite well other than washing out the sky on what was a very bright Sydney morning. 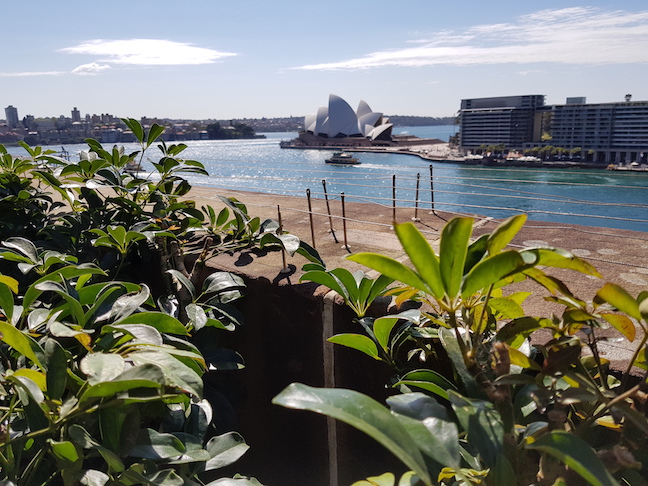 Sydney looking fine when shot on the Galaxy Note S8. The same image is available here as a 4.6MB .JPG, the native format and size the demo Note 8 produced.

Overall, this is a fine handset that will probably delight you. Samsung's Launcher is now clean and consistent. The company's own apps let you know they're around without getting in your face. It's a little hefty, but not clunky. Android Nougat is fast, responsive and stable.

One last thing: not one of the ten or so Note 8s on show at today's launch ever became noticeably warmer than one would expect during a few minutes poking and prodding. Samsung seems to have left that little problem in its past! ®