With little fanfare, Oracle formally tore the wraps off its SPARC M8 data-center-class processors and servers on Monday.

The House of Larry Ellison unveiled the fifth-generation successor to the fourth-generation SPARC M7, along with five server models, and a commitment to support its Solaris operating system for at least another 17 years. That's all the way to 2034 and potentially beyond.

The M8, first sighted and described in July, is a modest uptick from the M7. That's the M7 unveiled in 2015 with some anti-malware mechanisms, plus encryption and SQL query hardware acceleration built in.

The M8 is clocked to 5GHz, topping the M7's 4.13GHz. The latest generation processor has a 32KB L1 instruction cache, where the M7 has 16KB. The M8 has a 128KB L2 data cache per core, whereas the M7 has 256KB per core pair. Clearly, Oracle has figured its CPU needs a larger fast code cache near the execution engines and a rejig of the room at the back for stuff like program variables. The M8 can also issue up to four instructions at a time, compared to the dual-issue M7. This is about what you'd expect from a server-grade chip in 2017.

Interestingly, you can have up to eight M8 processors per machine, whereas the M7 supported a maximum of 16. This is a pattern for Oracle; the M7's predecessor, the SPARC M6, supported up to 32 sockets per system. In other words, Oracle believes you want fewer chips per box. The M8 can handle up to 8TB of RAM, whereas the M7 can hit 16TB due to the higher socket limit.

Beyond that, the M8 and the M7 are pretty much the same on paper. Both have 32 cores – the M8's are codenamed "SPARC Next" – and eight threads per core. (We've been waiting for SPARC Next to arrive since the turn of the year.)

Both are 20nm parts fabricated by TSMC, and both support up to 16 DDR4 RAM DIMMs. Both have 16KB of L1 data cache, 256KB of L2 instruction cache per four cores, and 64MB of shared L3 cache. Both support 16GB memory pages, and both had the aforementioned security measures and database acceleration hardware on the die. 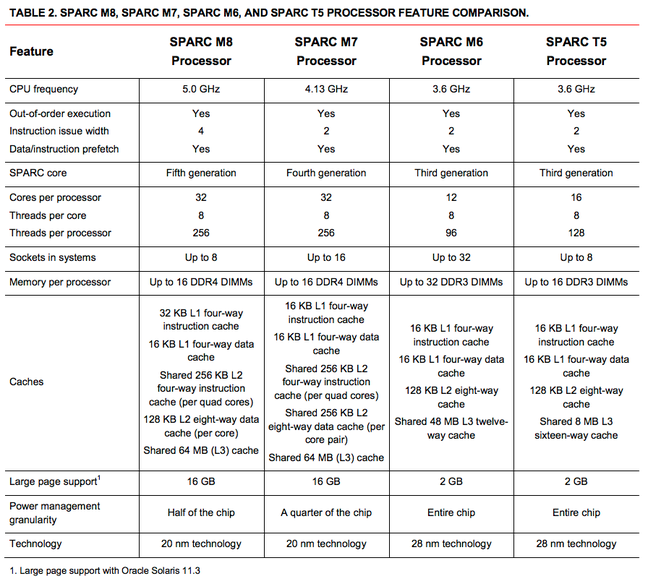 The key thing, in our eyes, is the wider instruction pipeline. That, coupled with the increase in clock frequency and the larger L1 code cache, has allowed Oracle to claim the M8 will be able to run its own Database software at 1.4x the speed of the M7, while Java code will run at 1.3x faster than the M7.

Oracle is also talking up the security capabilities of the M8, claiming it can perform hardware-accelerated cryptographic functions – such as AES, RSA and SHA-512 – at twice the speed of the M7. Back in 2015, Oracle supremo Larry Ellison touted bug-detection mechanisms in the M7 silicon as, effectively, anti-hacker defenses. We were told the technology could stop attackers dead in their tracks. Using metadata stored in the most significant bits of pointer variables, the chip's memory management unit can check to see whether or not a pointer is accessing regions of memory it has permission to do so. If the metadata, dubbed the pointer's color, does not match the color of the memory region it is accessing, the mismatch will be caught by the processor and the application terminated.

It is a solid technique but due to limitations in the implementation – for one thing, the top bits can be altered by the running application to match the required region – it was not quite the hacker-proof concept sold to the public. Now, we notice, Oracle has adjusted its marketing of this technology by describing it as a means to detect and trap programming errors before any damage is done. Any pointers in one thread trying to touch, say, the data in another thread unexpectedly can be detected and stopped.

In a white paper out this week on the M8, Oracle said of its bug-hunting feature, dubbed Silicon Secured Memory:

Modern applications use many threads working on large shared-memory segments. Bugs or pointer problems in these applications can cause highly unpredictable behavior and consume excessive amounts of an application developer’s time to troubleshoot and diagnose. Silent data corruption and buffer overruns are two of these difficult-to-diagnose problems. For both problems, Silicon Secured Memory dramatically reduces the time it takes for application developers to troubleshoot memory reference bugs. For silent data corruption, Silicon Secured Memory can facilitate immediate action to be taken by the application, preventing costly recovery efforts.

This should, in theory, stop programming bugs from quietly trashing data, or potentially being exploited to compromise a program or service. It's a useful mechanism for aiding debugging and troubleshooting.

"SPARC was already the fastest, most secure processor in the world for running Oracle Database and Java," Oracle chief corporate architect Edward Screven boasted on Monday. "SPARC M8 extends that lead even further."

The M8 will ship in one of five server models: the SPARC T8-1 (single-socket), T8-2 (two socket), T8-4 (four socket), the 8-socket M8-8, and the Supercluster M8 (a combination of the M8-8, Exadata Storage Server, ZS5-ES storage controller, and InfiniBand network switches). 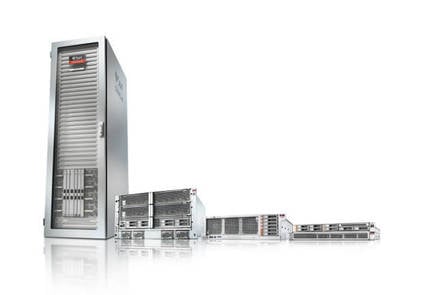 The fairly low-key M8 unveiling comes just ahead of this year's Oracle OpenWorld, which will be held in the first week of October in San Francisco, California. The modest step up from the M7, in terms of design, won't come as much of a surprise after a summer of turmoil for Big Red and its hardware division, where layoffs have been widely reported to be going on amid continued poor financial results and talk of delays for Solaris.next and its promised shift to continuous upgrades.

Oracle 'systematically denies' its sales reps their commissions, forces them to work to pay off 'debts', court told

In the past 12 months or so, AMD returned from the drawing board with its Zen-based Epyc data center chip line; Qualcomm barreled in with a brand-new ARM server processor dubbed Centriq; and Intel switched from a ring design to a mesh of cores in its latest beefy Xeon family.

And Oracle has a wider pipeline and a clock frequency increase. That's the highly conservative, install-once-charge-annually-forever, enterprise goliath we all know and may or may not love. Indicative of this, Oracle insists it is not walking away from Solaris any time soon. In fact, the database giant now promises to maintain support for the platform until "at least 2034." If you're going to go the distance, make sure you're ready for the Unix world's 2038 bug.

Oracle has posted a technical white paper [PDF] with further details on the M8 and its servers. For a deep dive into the M8, described as potentially the "last hurrah" of SPARC, check out our sister site The Next Platform. ®