More are paying to stream music, but YouTube still holds the value gap

Demand's there; compensating artists is another issue

The research confirms YouTube's pre-eminence as the world's de facto jukebox. 46 per cent of on-demand music streaming is from Google's video website. 75 per cent of internet users use video streaming to hear music. 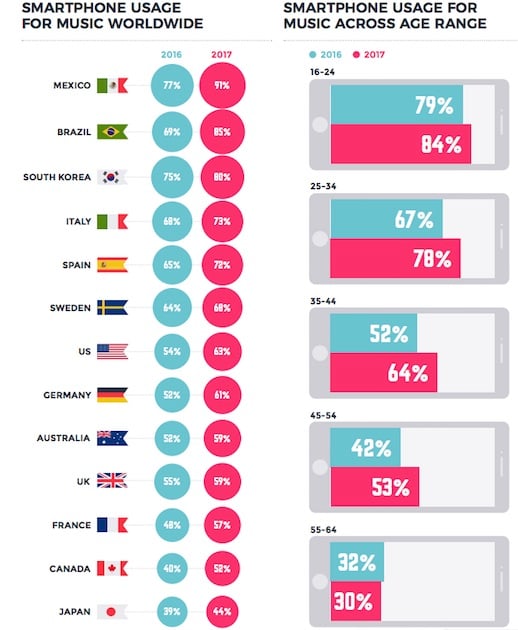 All respondents using a smartphone to listen to music in the past six months (11,776) from all 13 countries surveyed (US, Canada, GB, France, Germany, Spain, Italy, Sweden, Australia, Japan, South Korea, Brazil, Mexico)

The paid-for picture is bullish: 50 per cent of internet users have paid for licensed music in the last six months, in one form or another, of which 53 per are 13- to 15-year-olds. Audio streaming is split between 39 per cent who stream for free and 29 per cent who pay.

Although mobile is massive, with 91 per cent using phones to access music in Mexico, the UK is a laggard at 59 per cent.

So what's the problem? European policy makers have become convinced by the "value gap" argument: compensation doesn't reflect usage. Google finds itself with a unique advantage here, thanks to YouTube's "user-generated content" exception, as we explained last year.

It's really twofold. Firstly, Google's supply chain of uploaders might not deliver quality – you never know what you'll get on YouTube – but despite notice-and-takedown orders, (dubbed "notice and shakedown" by musicians) the supply continues uninterrupted. And Google's promotion of advertising over paid subscriptions also depresses the market price for music, they argue.

In its defence, Google argues that ad-supported free streaming reaches demographics that the music industry found hard to monetise anyway, particularly children. The IFPI found that of audio streamers aged 13-15, 37 per cent paid and 62 per cent listened for free. Of the paid group, 33 per cent paid for their own (versus 63 per cent for 16-64) while 36 per cent were members of a family subscription plan.

The data has crumbs for both sides – music demand remains incredibly strong, and teenagers are increasingly paying.

Proposals to narrow the value gap by plugging the UGC loophole are under discussion as part of tweaks to the European Copyright framework. Internet companies without a music licence would have to take more care over what they serve and filter uploads. Services with a licence wouldn't have to. It's arguable whether this plugs the YouTube loophole at all, but it received strong support from UK digital and culture minister Matt Hancock last week.

"We are supporting further copyright reform, to support rights holders and help close the value gap. Where value is created online, it must be appropriately rewarded," Hancock said.

The European Commission has said (PDF) the proposed filtering obligation "does not alter the provisions of Directive 2000/31/EC, nor does it provide a new interpretation of Article 3 of Directive 2001/29/EC (communication to the public)", but it's likely to be amended to protect ISPs later this year.

The survey polled users in 13 countries worldwide. You can find more here (PDF). ®