Pics In a modest industrial building in Mountain View, California, on Tuesday, security startup Knightscope unveiled the latest additions to its line of "crime-fighting robots" – the K1, a stationary weapon detector, and the K7, a sensor-laden dune buggy for challenging terrain.

The upstart's earlier models, the K3 and the K5, can be seen patrolling shopping malls, parking lots, and the occasional pond, from which they phone home, transmitting audio, video, and assorted sensor data.

"We're developing technology in the long run to be able to predict and prevent crime, " said William Santana Li, Knightscope chairman and CEO. "Crime has one trillion dollar negative economic impact on the United States every year. It's a hidden tax we all pay in blood, tears, and treasure. And our long-term ambition is to literally be able to make the United States the safest country in the world, changing everything for everyone."

Predict here is used in the aspirational sense. Knightscope isn't selling Minority Report-inspired pre-crime. It can't presently predict wrongdoing, though like PredPol and Palantir, it aims to try. At some point, the company anticipates using historical crime location data to direct its roving patrol units to likely hotspots of lawlessness.

Its prevention claim is more plausible. Presently, the biz's robots – 44 of which are operational among 32 clients – offer mobile surveillance and crime deterrence. Knightscope hopes to have 100 machines in the wild – if you can apply that term to malls, parking lots, and warehouses – by the end of the year.

Stacy D. Stephens, cofounder and veep of marketing, recounted how a customer, a Hollywood studio, had deployed a Knightscope robot to discourage transients from trespassing on a production lot.

The robot's presence achieved the desired result, he said, but pushed the problem down the road: the owner of a neighboring property subsequently got in touch to inquire about a way to discourage trespassers. 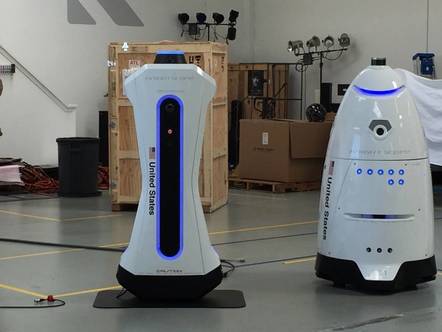 The K1 is not much of a robot, if you believe robots should move. It's a stationary sensor tower. Measuring 62.4in in height, 28.8in in width, 11.2in in depth, and weighing 150lbs, the K1 is a weapon scanner and will eventually be capable of scanning for radiation.

Utilizing millimeter-wave sensing, without walk-in enclosure, it's designed to augment security checkpoints by spotting concealed weapons at airports, hospitals, and other venues, at a cost that works out to $7 an hour. That's about half the mean hourly wage of a human security guard.

Customers don't buy the robots. Instead they contract with Knightscope for its hardware, software and services, for one to three years. The hourly rate assumes and requires billing for the entire day. Assuming the $7 hourly rate applies to the shorter contract period, a one-year contract thus would cost about $61,320.

The downside of machines-as-a-service is that customers can't really program their robots in ways not supported by the company. Clients can utilize the people detection, wireless device detection, and license plate scanning capabilities that Knightscope provides, for example, but can't train their own models to scan for specific things or implement their own sensors.

However, clients own their telemetry, so they can always export surveillance data and process it on their own.

Like a data center, Knightscope encompasses people, hardware, and software. "The only difference is our servers are outside and they're moving," said Li.

And with the K7, they will be moving faster. Weighing in at 770lbs, and measuring 116in long, by 63.9in wide, by 57.5in high, the K7 looks like a sci-fi dune buggy without seats for passengers. It could easily be mistaken for the sort of luxury toy that showed up on the last page of holiday catalogs mailed to high-income households, back when mail order shopping was a thing.

The futuristic rover is designed to be able to handle a wider range of terrains than the K3 and K5, which do best on flat, hard surfaces. Stephens declined to reveal the vehicle's top speed, but even at a modest clip, a collision would be ill-advised. Pricing for the K7 was also not disclosed.

Knightscope robots presently relay audio, video and other sensor data – the K5, for example, has a thermal camera that can watch for fires. According to Li, the upstart is exploring ways to make more sense of audio data, by detecting where sounds came from and being able to identify specific noises like footsteps. It's also working on conversational AI to communicate with people it encounters while on patrol in a more flexible manner.

Li said the company is focusing more on security because new customers demand it. "We have a lot of highly sensitive organizations that are incoming clients that have massive amounts of requirements for us to meet," he said.

Everything is potentially hackable, Lie acknowledged, even as he insisted the company is taking the threat seriously. "We're bolstering our cyber security practices, so everything is encrypted," he said. "We hire white hat hackers who try to break stuff. And now we're engaging a firm to do that continuously, as opposed to once a year."

Knightscope plans to show off its robots at the ASIS 2017 conference in Dallas, Texas, later this month. ®