Falling apart at the seamless: Inside Apple's LTE Watch fiasco

Analysis Just as the Apple Watch was set to go mainstream, bugs and poor design choices have taken the shine off the latest version of the hardware.

In two and a half years, Apple has improved the battery life and UI enormously, focused on health and is pushing those benefits hard at businesses with the sinister-sounding "Corporate Wellness" scheme.

So all was set for the Watch to appeal to a broader demographic than Apple and gadget enthusiasts. Watches that don't tell the time have been normalised. But what Apple hoped would be a differentiator – LTE – now threatens to tarnish the brand.

As I wrote after the first rumours of an LTE-capable Apple Watch surfaced, a 4G Watch is "fun... for about ten minutes". Only analyst Richard Windsor was bold enough to point out that 4G cellular makes a product worse, not better. 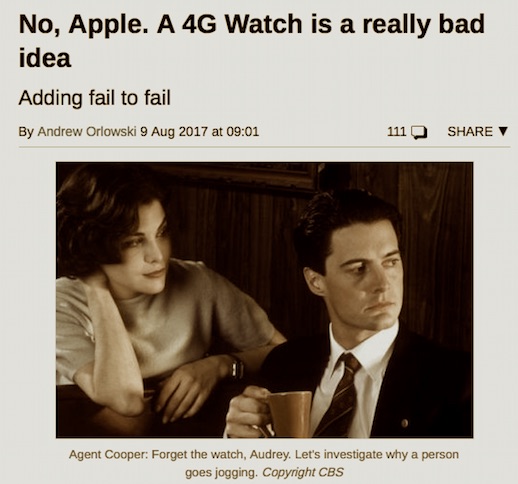 "Putting an LTE modem is pointless and could even harm what little appeal the product has," he predicted six weeks ago, and reading the first reviews of the Watch, his reasoning was spot on. Uncannily so.

"A modem will cause deterioration of the user experience for no perceptible improvement," he foretold, and importantly, the modem "will improve the functionality of the Apple Watch for only a tiny percentage of the user's day."

That said, the bugs and design choices are very unlike Apple, and largely unenforced.

This is the showstopper that reviewers have discovered (the device isn't shipping yet), and was sufficiently serious to prompt Apple to issue a statement. It's a known issue with unauthenticated networks. If you've previously logged onto a Wi-Fi network that needs a browser login (common with public networks like those found in hotels) via your iPhone, then this is sought out by the Watch. But the Watch has no browser, so you can't get in. This can be fixed in a variety of ways by Apple, and surely will be. It's strange that something so basic wasn't fixed up in months of testing, though.

Am I connected or not? It depends...

Apple is encouraging reviewers to think of the Watch LTE as an adjunct to your phone rather than as a Dick Tracy-style phone-on-the-wrist replacement. But in reality the experience is proving very uneven. That's because Apple and the network are trying to manage two devices or endpoints with one (IMSI) number. Since endpoints need a subscriber number, the result is a kludge – the iPhone has to be on even if you leave it behind, it appears, even though the Watch has LTE. And make sure the iPhone has the VoLTE (4G Voice and Data) turned on. Basically, your Watch is still "tethered" to your phone when you're out and about with just the Watch, but it's via the mobile network rather than Bluetooth.

If a phone can handle voice over Wi-Fi, it should be able to handover seamlessly to VoLTE. The Watch tries to do so but goes dark for about a minute, the Wall Street Journal's Joanna Stern found out. Oh, that's normal, Apple confirmed.

Not exactly seamless then.

We're still some way short of fully all-IP cellular networks, where the number is virtualised. You can't entirely blame Apple for this, but then as Gartner's Bill Ray reminded us last week, Apple helped devise the kludge. Or at least it's the most powerful member of the committee that designed it, so it's reasonable to infer it had a say in how things have worked out.

And what if the Watch is on 3G? I suspect that this is behind many of the handoff issues the initial reviewers problems.

[nb: The precise behaviour will vary from carrier to carrier]

WatchOS has some unwelcome as well as welcome changes. The most welcome is that you can now browse a conventional list of apps, rather than via the elusive and dysfunctional "honeycomb" launcher. But forget browsing through your phone's music library. The revamped Watch app now looks through the Watch's "local" music collection instead, firewalling your iPhone music connection. This negates one of the most popular use cases – playing your music while keeping your phone in your pocket.

While not on the scale of the connectivity teething issues, it suggests that LTE has been a major distraction for the Watch team.

Yes, an hour. This is not exactly news, as Apple confirmed this figure last week, but it's a reminder that even in a world of perfect seamless, bug-free connectivity, Watch with LTE is not a phone replacement for many use cases.

Note that the issues here affect the LTE model, not the LTE-free Watch 3. Which is now a good consumer product and strong alternative to fitness trackers. ®