Slack is distributing versions of its chatroom app for Linux machines that are not digitally signed, contrary to industry best practice.

The absence of a digital signature creates a means for miscreants to sling around doctored versions of the software that users wouldn't easily be able to distinguish from the real thing.

El Reg learned of the issue from reader Trevor Hemsley, who reported the problem to Slack back in August and only notified the media after a promised fix failed to appear.

"Slack distribute Linux packages for their app and those packages come from a yum repository that does not have a GPG key and the packages are not signed," Hemsley explained.

"This means that anyone who has installed Slack on an RPM-based Linux system has effectively given root access to packages that contain unknown and unverified content. If Slack were to get owned in the same way as MeDoc in the Ukraine, all Slack users would just pull down hacked packages and merrily install them on the system, giving instant root access." 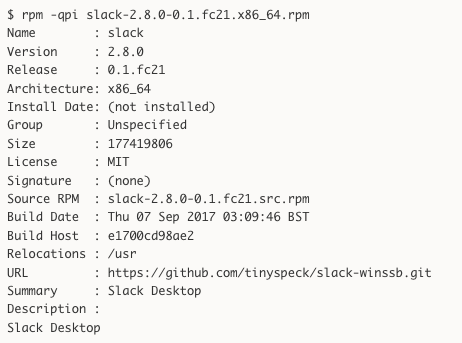 Standard practice is for software packages to be signed with a key, and for people to trust only packages signed by either the distro team or someone they trust.

GPG signing RPMs on RedHat/CentOS/Fedora, etc, is recommended. The Slack RPM is not signed. El Reg approached Slack's PR team for comment and was told: "Slack takes security very seriously and we're constantly looking for ways to improve. This is something we're indeed working on. It's been on our roadmap for quite some time and is coming very soon." ®