Revenues are up, but NoSQL firm still burning through cash 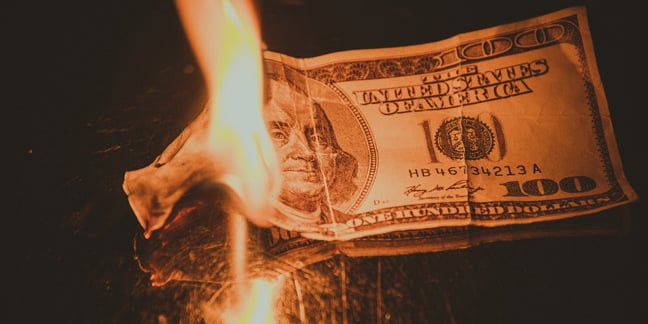 Oracle-chaser MongoDB has filed to go public, with its accounts revealing it made a net loss of almost $90m in the year ended January 31, 2017.

The company, which started life as 10Gen in 2007, has secured a total of $303.4m in equity funding to date, and is hoping to raise $100m in its initial public offering.

MongoDB's SEC filing, one of the first stages of going public, follows last month's news that it filed confidentially for an IPO.

The S-1 form reveals that – despite almost doubling revenues between the financial years of 2016 and 2017 – MongoDB is still making heavy losses.

Most of the company's outgoings are on sales and marketing – it spent $78.6m on these activities in FY2017 – while $51.8m went on R&D, and the company expects such operating expenses to "increase significantly" as it aims to expand its customer base.

Its focus is on enterprise customers, and the biz stated its intention to win over customers that were migrating applications from legacy databases, pointing to IBM, Oracle and Microsoft as the main competition.

Other competition listed included non-relational database providers and some cloud providers like AWS, Google Cloud Platform and Azure, with MongoDB noting that they have strong brand recognition and established positions in the market.

However, it also pointed to the large, and growing, size of the worldwide database market – IDC estimated it at $44.6bn in 2016, and predicted it would grow to $61.3bn in 2020 – and said it was ripe for innovation.

"Legacy database vendors have historically dominated this market," the firm said in its filing. "We believe this market is one of the few within the enterprise technology stack that has yet to be disrupted by a modern alternative, creating our opportunity."

Among its business plans, MongoDB said it planned to push out use of its Database-as-a-Service offering, MongoDB Atlas, noting that it had recently introduced tools to help existing users of its Community Server migrate to Atlas.

It also pointed to the strong developer community, saying Community Server had been downloaded more than 30 million times since February 2009, adding that fostering this community would increase brand awareness.

MongoDB's move follows Hadoop-flinger Cloudera's IPO earlier this year, and with other firms like Snap – and possibly MapR – also choosing to go public this year, observers are watching the tech market closely.

"When you compare the tech IPO market over the last few years, 2017 has been a strong one for startups, and it is indicative of a larger shift in the industry – particularly with regards to cloud technology," said Ramin Sayar, chief exec of Sumo Logic, a MongoDB partner.

"Now more than ever, the shift to the cloud and industry-wide adoption of other emerging technologies has created an opening for companies like MongoDB to move beyond legacy companies and databases," Sayar said.

"We have passed traditional IT and entered into a new age of connectivity where business and technology are inseparable, and old-guard companies cannot keep up." ®

Dell Tech: We have a plan B for bog standard IPO