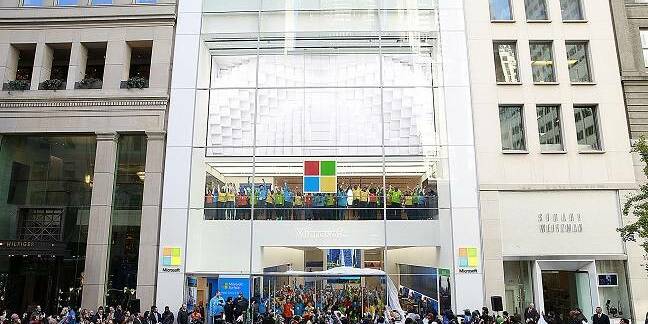 Microsoft has revealed the location of its flagship UK store – just up the road from Apple's flamboyant, tree-lined Regent Street shop.

The new store, which the company reportedly started scouting for back in 2015, will be at Oxford Circus, one of the most stressful places to visit busiest shopping areas in London.

Microsoft said the store will be "where two of the world's most iconic shopping streets meet", putting it near the junction with Oxford Street.

That would see it rubbing shoulders with the likes of Nike Town, H&M and lingerie shop Tezenis.

It also puts it just two minutes' walk – some might say pissing distance – from Apple's flagship Regent Street store, so Microsoft will no doubt be planning how to up the interior design ante, and ensure it pulls in the crowds for the all important headline-grabbing queues around the block.

It isn't clear whether Microsoft's offering will, er, actually sell anything: the head of Microsoft stores David Porter said it would showcase gaming – with gatherings to play FIFA and Forza – mixed reality and AI technologies.

In words you can easily imagine being repeated by hundreds of dead-eyed robot dolls in a horror flick, he said: "Microsoft Store is a place to have fun!"

Which, to be fair, is more than can be said for the average visit to an Apple store, where bemused customers are left to sit around on cork squares under trees waiting for their fondleslabs to be fixed by polo-shirted "Geniuses".

Cindy Rose, head of Microsoft in the UK, helpfully added that the store would be "so much more than just a great place to experience all that is possible with Microsoft, but a real hub for the community".

Microsoft offered no further details of the timeline for the opening of the store. ®